You know going into a Terry Gilliam film, the experience is going to be unique. The Monty Python star-turned-director of such classics as Time Bandits (1981), Brazil (1985) and 12 Monkeys (1995) takes on another look at a dystopian future with his latest, The Zero Theorem (2013). With two-time Academy Award-winning actor Christoph Waltz (2009s Inglourious Basterds and 1012s Django Unchained) heading up the cast, you know the ride is going to be a special one. 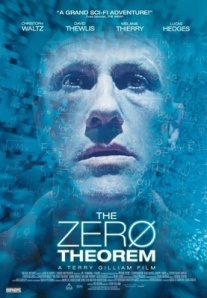 Waltz stars as Qohen Leth, a computer programmer who works for a company called Mancom. He has been waiting for a mysterious phone call while questioning his existence. He hates to leave his home (an abandoned church) because of the world in which he lives is surrounded by advertisements and sensory overload. He wants to be assigned to home duty but instead is given virtual therapy sessions with Dr. Shrink-Rom (Tilda Swinton, The Chronicles of Narnia). He wants to meet with management (Matt Damon, Elysium), which may or may not have eventually happened, depending on how you take the events of the film. 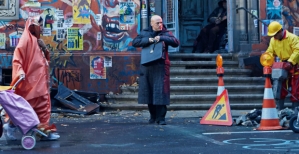 At a company party, Qohen meets Bainsley (the enchanting Melanie Thierry) who appears to have feelings for Qohen but isn’t quite whom she claims to be. After Qohen is assigned solve the Zero Theorem, a mathematical formula that may hold the meaning to life, he begins working with Bob (Lucas Hedges), management’s son. His life begins to spiral out of control as he ignores the outside world, hiding within the confines of his home and maddening work. Why is management watching him? Is Dr. Shrink-Rom really trying to help Qohen?

If you’ve never seen a Terry Gilliam film, then you are in for a treat as long as you go in with the right expectations. There are so many visuals to take in while watching the film, it requires multiple viewings. The musical score from British composer George Fenton (Planet Earth) is haunting and greatly enhances the experience. Waltz puts in an amazing performance, every bit as great as his Academy-Award winning films but less likely to earn him any mainstream recognition. Gilliam offers up films that are a far cry from the usual Hollywood fare. Enhancing the film with brief appearances by Damon and Swinton adds to a complete package that is unique and hard to honestly describe. 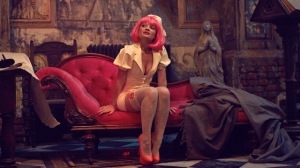 With all of that said, I really enjoyed it. Not my usual type of film and one that I really needed to be in the mood for. Thankfully, I was in the right state of mind to enjoy it. The Zero Theorem is currently making the rounds through On Demand services and streaming services such as Amazon and iTunes. However, there is no North American home video release date yet. As you start searching for it, watch the trailer to get a glimpse of the journey that awaits you. I recommend you check it out however you can. 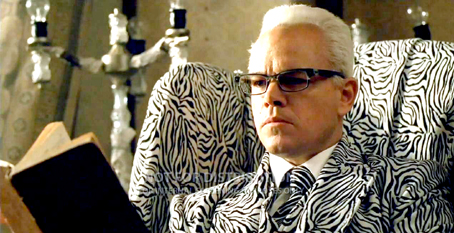