Now that Mr. Karloff is back in the tomb after tasking me for 33 days in a 31 day tribute, there are some loose ends to close out October. Easily, October is the busiest month of the year here at Monster Movie Kid Central. It’s a lot of fun and this year was the best ever, revisiting films I hadn’t seen in over a decade. However, the hangover in November leaves me wanting to take a quick break and mentally recharge, not to mention giving my DVR some much needed love and attention. However, there were three events and two movies last month that definitely need some attention.

First and most importantly, the 2014 Free State Comicon happened on Oct. 25. This marked my first appearance as a guest, planned entirely by Mr. Joel Sanderson aka Gunther Dedmund over at the Basement Sublet of Horror. While it was definitely an odd experience being on the other side of the table, I had an incredible day. I had a chance to talk about this blog to both current and new readers. While there are no delusions of grandeur, the fact that people enjoy reading my random ramblings on movies old and new is something that still amazes me. I met several great creators including writer CW Cooke, Darren Neely and Scott Schmidt, not to mention artist Rik Livingston. I ran into some old friends and even had a surprise visit from my daughter Kayla. Great conversations with Rik and Joel topped off a day where I may have spent too much money from several of the great vendors in attendance. Craig Klotz puts on a top-notch event and I cannot recommend his shows enough. I will certainly be attending more in the future with money in hand. And even if I never sit on that side of the table again, it was an experience I never thought possible. Thank you Joel Sanderson and here’s to more great projects ahead in 2015! By the way, be sure to check out his site as the comic book and magazine (with yours truly) are still available and well worth your time.

I also had the opportunity to attend four very different movie events in October. Here’s a quick look:

Nosferatu (1922) at the Kauffman Center
Several years ago I had the chance to watch Nosferatu on the big screen at the Wichita Orpheum Theatre. It was horrible! A less than stellar print with a horrendous soundtrack caused me to walk out mid-way through the film. The Kansas City Symphony made up for that in such a way they may have spoiled any future showings. First, the Kauffman Center is amazing with spectacular views of downtown Kansas City. They showed the Kino Lorber Blu-ray print with Grammy award-winning organist Dorothy Papadakos performing an original score. A tremendous experience from beginning to end.

National Theatre Live presents Frankenstein
This was my first time watching a play screened at a movie theater. Despite some technical issues at first, it was a lot of fun. While the performance is about three years old now, it was my first time to see Benedict Cumberbatch as the Monster. He was fantastic and may very well be one of my favorite versions of the Monster. This will likely never be released on home video so if you ever have a chance to see it, I cannot recommend it enough.

Dracula Untold (2014)
Mixed reviews aside, I really enjoyed this new take on Dracula. I thought Luke Evans was great in the role and while it was a bit of a CGI fest, the CGI was great. I thought the story was good and it entertained me. I don’t ask for more than that. So, I recommend you check it out when it comes to home video. Definitely deserving more attention that it seems to be getting. 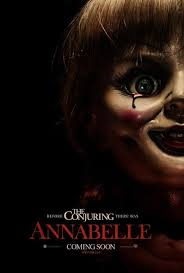 Annabelle (2014)
I absolutely loved The Conjuring (2013) so I was initially excited about this prequel. However, I was also skeptical that it could make an entire movie out of what was really a prologue in the first film. Annabelle has some good going for it including setting it in the 70s with genuine creepy moments. However, it does succumb to the temptation of too many jump scares. I liked the somewhat cheesy demon but can understand where others would not. Definitely worth a rental but, ultimately, it seemed a bit forgettable. Fun at the moment but not something you’ll want to revisit again and again.

Okay, that’s it. October is finally in the books. Time to slow things down a little as we begin to enter the holiday season. I’ve got some fun articles coming up as the turkey is in the oven and the Countdown to Turkey Day commences next week. And ideas are brewing for what needs to be called the 3rd Annual Countdown to Christmas in December. Until then, as always, thanks for reading and your continued support!