By 2001, Jurassic Park had moved beyond a film series based on two novels. It had become a legitimate franchise that had extended beyond the cinema. There were video games, comic books, toys and all the usual assorted movie tie-ins. And let’s not forget the incredibly fun Universal theme park rides. Jurassic Park was a marketing success across the board. So, after four years, fans of the series wanted more. However, as what usually happens with an ongoing film series, we get farther and farther away from the source material with each film. Is Jurassic Park III the proverbial “jump the shark” moment in the franchise?

Neither Steven Spielberg nor author Michael Crichton were directly involved with Jurassic Park III, nor was musical genius John Williams. Spielberg was still on board as an executive producer but he had handed directorial reigns to Joe Johnston. Up to this point, Johnston was successful with such films as The Rocketeer and Jumanji, not to mention his passion for the franchise, so it seemed a safe bet. John Williams was unavailable but recommended Don Davis for the musical score, who incorporated some of the original score into the film alongside his own work. Sam Neill and Laura Dern reprised their roles from the first film as paleontologists Dr. Alan Grant and Dr. Ellie Degler (now married with children and still carrying a torch for Alan, present here only in a small role). The stage was set for the third film.

As with The Lost World: Jurassic Park, the action of the film takes place on Isla Sorna. The island is now off-limits and has become a bit of a political hot bed. As our movie begins, we are introduced to young Eric Kirby (Trevor Morgan, Vampire) and another man parasailing near the island only to have their boat attacked, leaving them to land on the island. We then see Dr. Alan Grant still attempting to gain funds for his ongoing research despite being famous for the incidents of the first film. He believes the Jurassic Park creatures to be genetically engineered monsters and not true dinosaurs, refusing to talk about the events at the park or in San Diego. Alan is working with a young assistant named Billy Brennan (Alessandro Nivola, American Hustle) who convinces him to accept an offer from a wealthy couple to be their tour guide during a flyover of Isla Sorna. However, Paul and Amanda Kirby (William H. Macy, Mystery Men, and Tea Leoni, Madam Secretary) are hiding something and it becomes quickly apparent this is more than just a rich couple’s whim.

While it was good to have Sam Neill back in the franchise, it’s unfortunate that the script wasn’t a better one. At just 93 minutes long, it’s painfully obvious how contrived the plot is and how little we have to go with here. Even at that length, the movie tends to drag on a little. The awe and wonder so present in the first film and somewhat lacking in the second appears to be long gone here. Of course, the dinosaur sequences are exciting and we do have some very tense scenes, especially those involving the Pterandons. And the changes in the velociraptors were a sign of ongoing discoveries about these creatures from a long ago past. Yet, it all just seems to be pale in comparison to what we witnessed in the first film.

Jurassic Park III is definitely fun as a throwaway piece of a Saturday afternoon summer matinee time killer. It’s an easy way to get out of the heat but won’t leave you wanting to come back for more. There is too little plot and character development to leave you really caring about the people we see in peril on the screen. It really just seems like one action sequence after another. Without any emotional investment in the characters, you find yourself almost cheering for the dinosaurs. 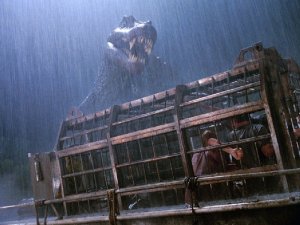 Despite being commercially successful and clearly leaving the door open at end of the movie for more, Jurassic Park III would be the last chapter in the franchise for the next 14 years. Fans would continue to relive the past with the films and water rides while anxiously waiting for something new and exciting.

Next time, we wrap up our look at the Jurassic Park franchise with the newest entry, Jurassic World (2015).