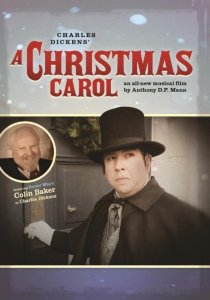 I love a good ghost story. I also love the tale of Ebenezer Scrooge, a glass of egg nog and a roaring fire in the fireplace. Combine all of those elements and you have a perfect Christmas Eve. Now, over the years, we’ve seen countless versions of Scrooge, some better than others. Many are faithful adaptations while some have chosen to take a different path. It is down this side street in the town called Dickens that brings us to A Christmas Carol (2015).

I’ve been following Anthony D.P. Mann for years now. I was first introduced to his passion for films through the Horror Etc. podcast. From there, I’ve enjoyed his journey into filmmaking with such efforts as Sherlock Holmes and the Shadow Watchers (2011) and Terror of Dracula (2012). Despite his micro budget, he brings a passion to his films that is clearly evident and separates him from many who are simply cashing the checks and paying the bills. Now, his lifelong association with Scrooge has been brought to life in a very bold way.

Rather than simply do another version of the tale we all know so well, Mann made the daring decision to not only change key elements of the story but to make it a musical. Oh sure, musical versions of Scrooge are nothing new but an independent effort? That decision alone separates this version from the rest of the pack. The results are mixed but there is no denying that Mann’s passion is present in every scene.

Mann’s directorial style is one of the best aspects of this 60-minute movie. He is growing as a director and I hope his next film allows him a bigger budget as I would love to see what he could do with a grander canvas in which to create. While I’ll admit that the trailer had me quite worried on how he would change the story, I was pleasantly surprised with how well the changes worked. Having most of the story take place in the office was obviously a necessity of a small budget but it works well enough. While I’m still not quite sold on the younger version of Scrooge, nor with the obvious wig upon Mann’s head, I found that I became more accustomed to the jarring images as the story unfolded. 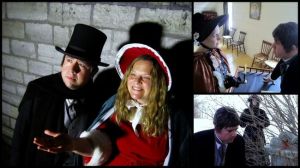 There are limitations you must get through to truly enjoy the story. As with all low budget films, the acting is hit and miss with some actors being much better than others. Adding in musical numbers was a risk that generally pays off. Again, the real singers stand out while a few are a bit painful to get through. The sound editing was uneven with some scenes clearly needing an auditory fix. Yet, the musical numbers were thankfully done quite well. But what about that CGI snow? Perhaps it was needed but it stood out in several scenes. Again, the downside of a low budget but it shows an honest effort from the filmmaker and that helped me to accept it.

One of the great positives is the addition of Colin Baker (Doctor Who). He elevates the film in his role as Charles Dickens, narrator of our story. I personally would have avoided the clichéd “vintage” black and white film look at the beginning of his segments. It wasn’t convincing and I was thankful when the images went to color. His humor was perfect and mugging for the camera as only Baker could do makes for some jovial moments in what can sometimes be a very dark tale. In fact, Mann incorporates humor several times throughout the film and does so quite well.

While A Christmas Carol won’t replace my all-time favorite versions and may not join the list of annual viewings, I thoroughly applaud Mann and must say again that I was pleasantly surprised and I did enjoy the film. Mann shows his passion through his writing and directorial talents. I hope that with his next film, he receives a bigger budget in which to create and that he remains behind the camera to allow his talent as a director to continue to grow as that is where I see his true calling. I personally don’t think the trailer does the film justice, so I recommend you track this one down on Amazon and judge for yourself this holiday season.