House of Mystery (1931)
Based on The House of Death by Judson P. Phillips
Screenplay by Samuel Freedman
Produced by Stanley Bergerman
Directed by Kurt Neumann

Plot: In these two-reel mystery shorts, The Shadow serves as narrator for quick mystery dramas. In Burglar to the Rescue, a banker is using bank funds to spoil his mistress when a previous victim of his scheme breaks out of prison for revenge. In House of Mystery, it’s a classic tale of an extramarital affair and retribution…or is it? And finally, in The Circus Show-Up, a trapeze artist is murdered and a detective must determine which of the circus folk committed the crime.

Personal Thoughts: Before Orson Welles brought The Shadow to life on radio in 1937 and even before Walter B. Gibson created the character for The Shadow magazine in 1931, The Shadow was a narrator of crime and mystery thrillers on the Detective Story Hour.  The radio program was launched in 1930 with The Shadow as host of the stories. It was only after listeners began asking for a magazine that the publishers, Street and Smith, launched The Shadow magazine and the character began to feature in the stories. In 1931, Universal Pictures launched a series of six two-reel murder mystery shorts with The Shadow as narrator. Frank Readick, who was the voice of The Shadow on air, is uncredited as the voice in these shorts. However, I am personally doubtful that Readick did the voice in all three that I watched. It sounds like his voice in the first short, Burglar to the Rescue, but the voice is quite different in the other two. It is more likely that another actor assumed the role once production moved from New York to Hollywood with the second short. It’s also doubtful he provided the shadowy figure we see on screen. The Shadow plays a bigger role in the first short, with reduced screen time in the other two. Don’t expect too much of the familiar “crimes does not pay” avenger here as he comes off more like The Whistler. That said, I found these shorts actually quite entertaining and well worth the time tracking down. The stories are rather simplistic but with less than 20 minutes to tell the tale, there wasn’t enough time for more than what they offered. 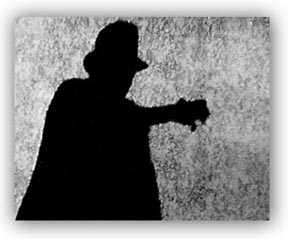 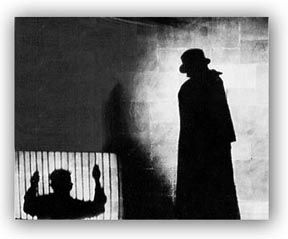