There are many sub-genres within the endless array of horror films but the two-headed monster category is certainly one of the more obscure. There are only a handful of films that can truly claim such a creature and most of those are marginal at best. Throw in such words as “public domain” and your expectations may drop even more. However, as we all know, there are often hidden gems to be discovered and The Manster (1959) is one such film that deserves more recognition than it usually gets, especially considering that it is the first of the two-headed monster genre. 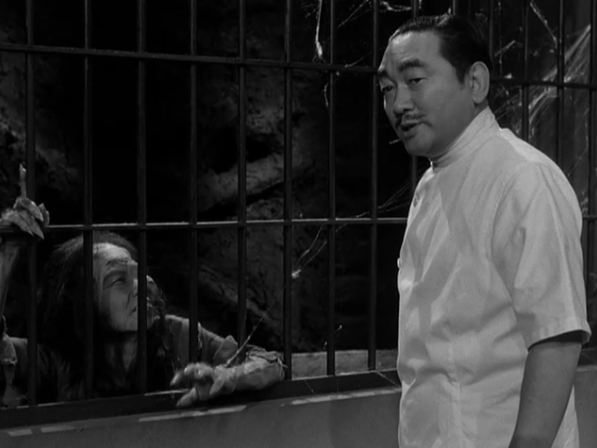 The plot centers on reporter Larry Stanford (Peter Dyneley) getting ready to wrap up an assignment in Japan after interviewing scientist Dr. Robert Suzuki (Tetsu Nakamura, The Human Vapor, The Mysterians, Mothra, Atragon). Suzuki is conducting bizarre experiments in a mountain laboratory involving bringing out the hidden beast within man in hopes of an evolutionary leap for mankind. After Suzuki secretly injects Stanford with a serum, Stanford begins to suffer body aches and attitude changes. This results in him leaving his wife Linda (Jane Hylton) for a romance with Tara (Terri Zimmern, her only film credit), Suzuki’s assistant. A murder spree soon follows before Stanford grows a second head (quite animalistic in appearance) that was preceded by a very eerie eye growing on his shoulder. With the Japanese police soon on his trail, Stanford’s only hope is to return to the Suzuki on the mountain in search for a possible cure.

The Manster is a very well-made film with some occasionally effective special effects and quite a lot of atmosphere courtesy of the foreign setting. The eye on the shoulder was particularly chilling. Once the head materializes, it’s generally kept in the shadows, protecting it from being too visible and becoming an object of laughter, which generally happens a little anyway. However, the separation sequence is really well-done and deserves more recognition than it has received.

Tetsu Nakamura was great as Suzuki, who actually works very well as a mad scientist. However, I’m still not sure what his ultimate goals were as they remain a little hazy at best. While Peter Dyneley (Day of the Triffids) works well enough in the lead role, I envisioned a stronger lead (perhaps John Agar) being able to do a little more with the role. I also felt actress Jane Hylton was only adequate in her role and seemed a little too desperate at times. Again, a better actress might have been able to do more with what little she had to do in the film.

The Manster was actually an American production filmed in Japan with Japanese actors and a mostly Japanese crew. George P. Breakston wrote the original script and is one of two directors credited on the film. The Manster is probably his best remembered film among his 14 directorial credits but he is better remembered as an actor for his role as “Breezy” Anderson in the Andy Hardy film series in the late 30s and early 40s. The other director, Kenneth G. Crane, also directed the American scenes in Half Human (1958) as well as Monster from Green Hell (1957). Unfortunately, no reason can be found why the film had two directors but both appeared to work from start to finish and in tandem. 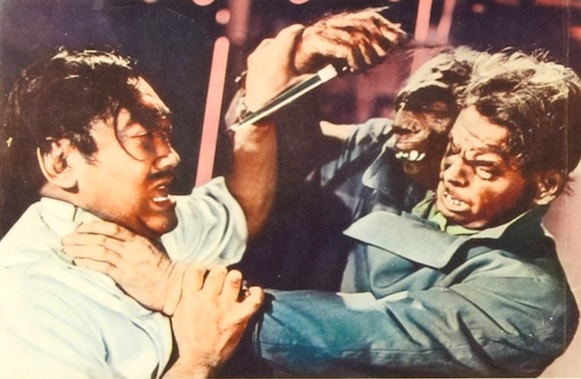 When The Manster was actually released remains a topic of debate to this day. Some sources claim it was released on July 1, 1959, while others suggest it may have been on March 28, 1962, in San Francisco. It was also part of a double bill in 1960 alongside Eyes Without a Face (1960), which would appear to support the possible 1959 release date. Whatever the year, The Manster quickly disappeared into the obscurity of late-night creature features, including that of Elvira’s Movie Macabre.

For now, The Manster is available in public domain and can easily be found online or through such video distributers as Mill Creek. The print is actually quite pristine, a rarity for public domain films, which may very well increase your possible enjoyment factor. Monster Movie Kid encourages you to settle in for 75 minutes and judge for yourself. I think you’ll enjoy it as it certainly gave me a pleasant surprise.

Monster Alert: As part of a Tuesday Two-Fer, be sure to check out Jeff Owen’s thoughts on another two-headed monster classic, The Thing with Two Heads (1972), on the Classic Horrors Club website!