The winners of the 17th Annual Rondo Awards have been announced! Congratulations to everyone involved including all of the winners and nominees. You can read the full list at the Classic Horror Film Board but I wanted to take a moment to recognize a few friends and familiar faces.

Again, congratulations to all of the winners and nominees!

Plot: Martians land near a small town and begin to take over the townspeople. However, young David witnessed the spaceship land and when his father begins to act odd, he desperately looks for someone to believe him before it’s too late. 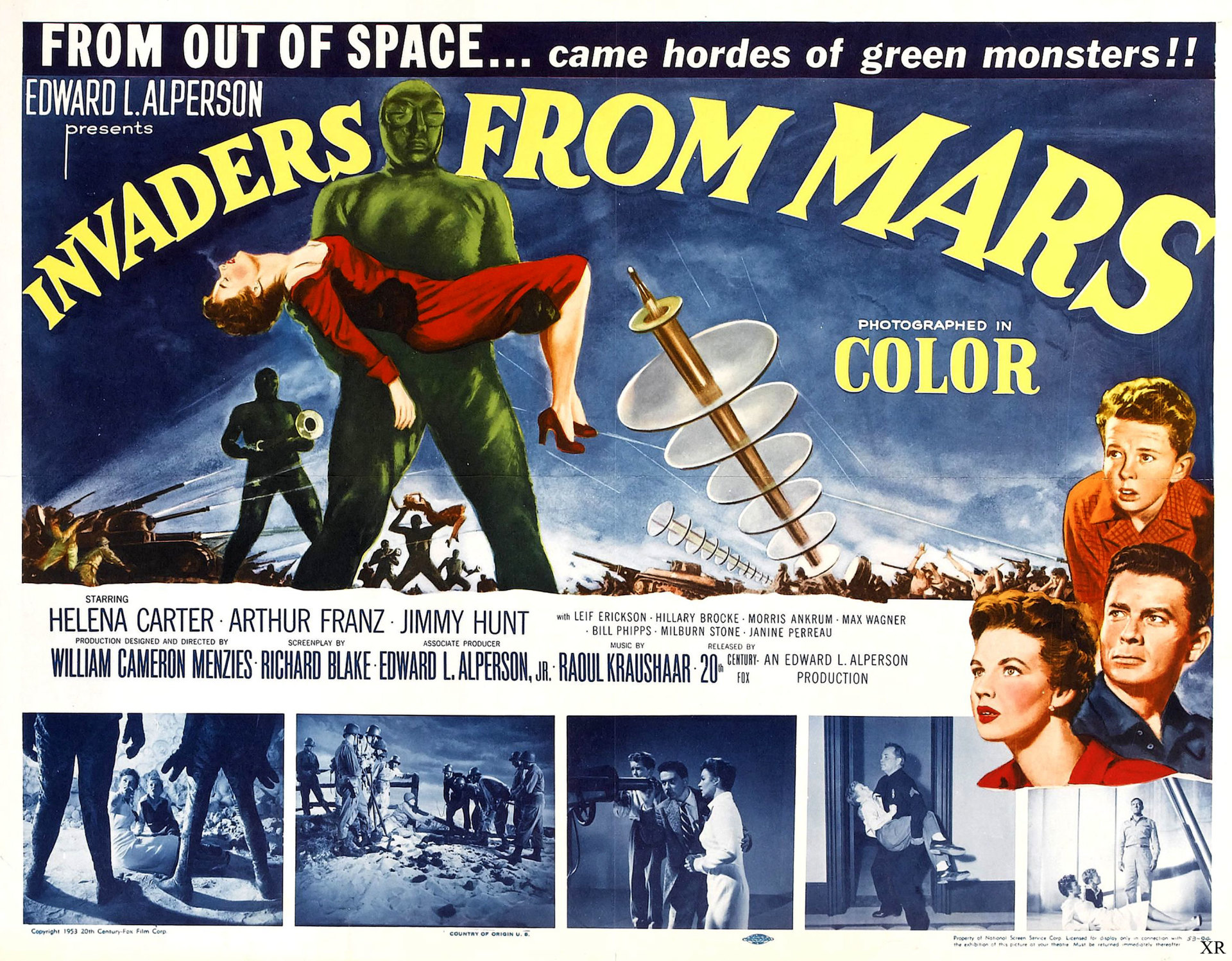 Richard’s Review: I really enjoyed this one as it’s full of great visuals and sounds. I loved the set-up of the two doctors helping young David as his parents were taken over by the Martians. I also liked how the military openly listened to David as they became aware of the Martian threat rather than dismiss him, as often happens in this movies. Young Jimmy Hunt was really good in his role as David and I’m surprised that he never did another genre film, other than a small role in the 1986 remake. A great cast and fun script helped round out this sci-fi classic.

There are two versions of this film. In the American version, which I watched first, the ending (spoiler) is a bit of a big cheat and I’m not a fan of how it played out. However, the UK version, which I watched second, ends it a bit more decisively and is my preferred version to watch. There’s also some additional footage in the planetarium about UFO cases. Check them both out to decide for yourself which one you prefer.

Karla’s Thoughts: I liked how this movie took at least a slightly more realistic approach at times despite getting off track with some very unrealistic facts. I really liked young David and his working with the military to help his parents. However, I was quite shocked at the death of the little girl early on. Thank goodness we didn’t see it on screen. I also really hated the dream sequence ending in the first version we watched. I did really like the movie though despite the lousy ending. 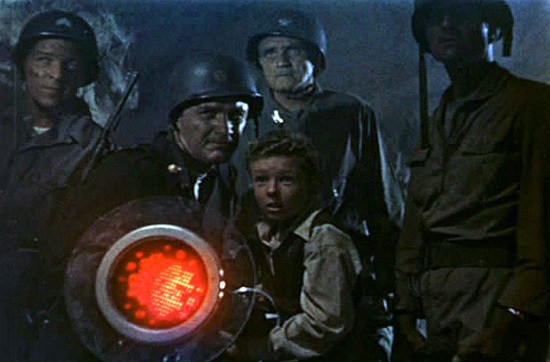 Availability: All home video versions of Invaders from Mars are currently out-of-print and demanding higher prices. Shop around for the best deal or watch it on Amazon Prime Video.

Plot: After a near collision with an asteroid, two astronauts are forced to abandon ship and land on Mars. Only one man lives with little hope of survival on the barren landscape, armed with only a monkey and limited supplies. But who are the mysterious aliens who arrive and will a slave he names Friday help him get home again? 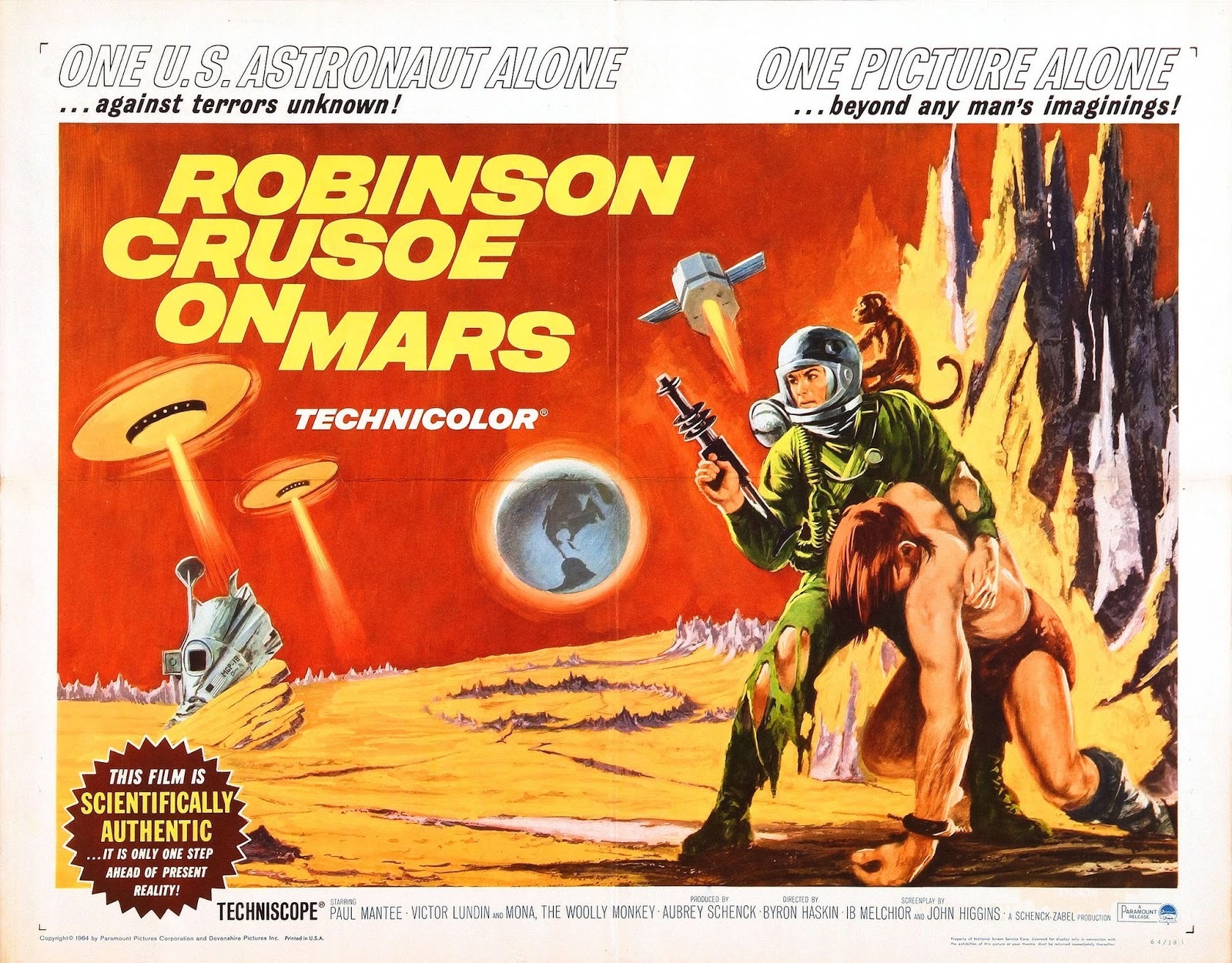 Richard’s Review: The one thing that struck me early on with the film is the lack of music as Draper is discovering his new surroundings. It helped with the feeling of isolation and that fact that he was essentially stranded on a desert isle. Once he discovers that McReady is dead, his grief is short-lived with the arrival of Mona, who plays a key role in his survival. One Friday enters the picture, I immediately began to think back to Enemy Mine (1985), a film I’ve always believed had to have been partially inspired by Robinson Crusoe on Mars. I really enjoyed this one, which felt like a nostalgic version of The Martian (2015) early on. However, I really wanted more in the final scene. At 110 minutes, the film runs a little long and could have been edited a little tighter to allow for a bigger sequence at the end.

Karla’s Thoughts: Overlooking the obvious scientific issues with the film, I enjoyed this one and would watch it again. I would have chosen Adam West as the lead over Paul Mantee. I did like how we saw the process in which Draper adapted to his new environment but it could have been shortened. I also liked how Mona is responsible for saving his life. I wanted more of an ending though as it seems way too rushed.

Availability: Robinson Crusoe on Mars is available on Blu-ray from The Criterion Collection.

It’s a previously-unannounced meeting of The Classic Horrors Club as Jeff and I welcome Justin Humphreys in episode 30! Justin is a film historian and author of The Dr. Phibes Companion, which has been nominated for Book of the Year in this year’s Rondo Awards. We barely scratch the surface of the Vincent Price classic The Abominable Dr. Phibes (1971) and its sequel, Dr. Phibes Rises Again (1972), but the behind-the-scenes conversation is fascinating and we appreciate Justin joining us.

The Dr. Phibes Companion, is available on Amazon and is published by Bear Manor Media.

Have you voted yet? Time is running out for this years Rondo Awards!

We want feedback! Call us at:

…join us in our clubhouse at:

Plot: Survivors from a doomed Mars expedition return to Earth with one unconscious and another traumatized. Through a prolonged process, we learn the tale of the ill-fated crew and the mysterious creatures they encountered on the red planet.

Richard’s Review: I enjoyed parts of this fun flick but found that it definitely did drag a little at times. The giant rat bat spider creature is still creepy as was the amoeba. The red special effects were also cool and didn’t bother me but I was surprised by the limited sets and outdated sci-fi elements. Other shows from the same era were a little more advanced. The non-linear storytelling was unique and the cast was entertaining despite a weak script. Fun fare for an afternoon matinee.

Karla’s Thoughts: I was really surprised how scientifically inaccurate this movie was considering the year it was made. The misinformation on Mars seems dated for 1959, from the spacesuits to the weird and cartoonish red visuals on Mars. The giant amoeba and carnivorous plant were a little illogical but the spider was definitely creepy and I thought the infection caused by the amoeba made sense. I did enjoy how the story was told through flashbacks and it was definitely fun, just odd for the time period. 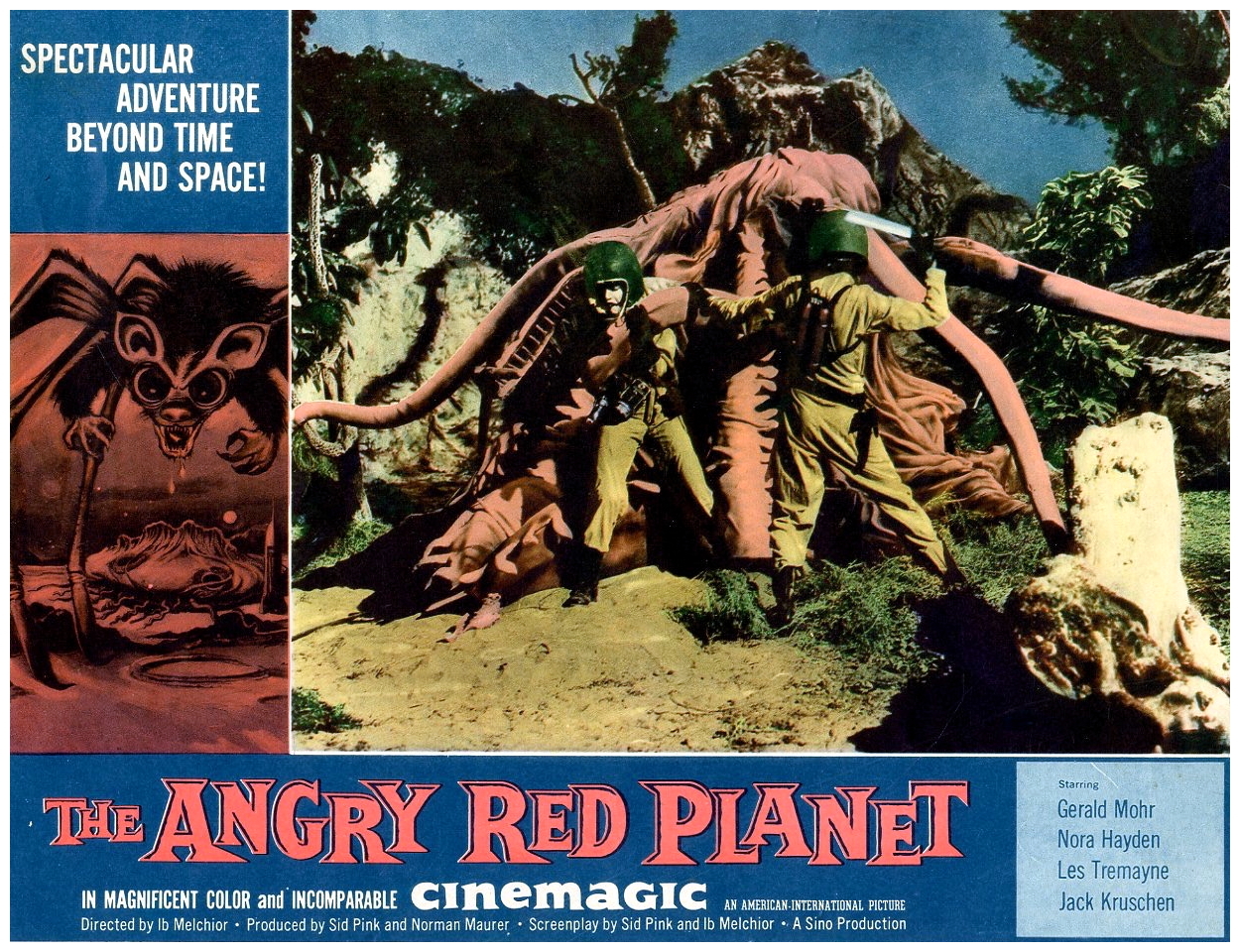 Availability: The Angry Red Planet (1959) is currently available on Blu-ray or as part of a four-film DVD set.

If something frightening happens to you today, think about it. It may be…The Omen!

This month on episode 29 of the Classic Horrors Club Podcast, Jeff Owens and I dive into The Omen Trilogy! We start off with the original, The Omen (1976), before things start to get a little questionable with Damien: Omen II (1978) and, finally, The Final Conflict (1981)!

We also take some time to talk about the 17th Annual Rondo Awards. Check out the suggestions below for a small example of the many great nominees! You have until midnight on Sunday, April 20 to vote!

We want feedback! Call us at:

…join us in our clubhouse at:

Plot: Newspaper reporter Steve Abbott joins a group of scientists on a mission to Mars. After they crash land on the red planet, they discover Martians look just like us and live in an amazing underground city. However, all is not as it seems as Mars is dying and the Martians are planning to steal the rocket ship to conquer Earth. 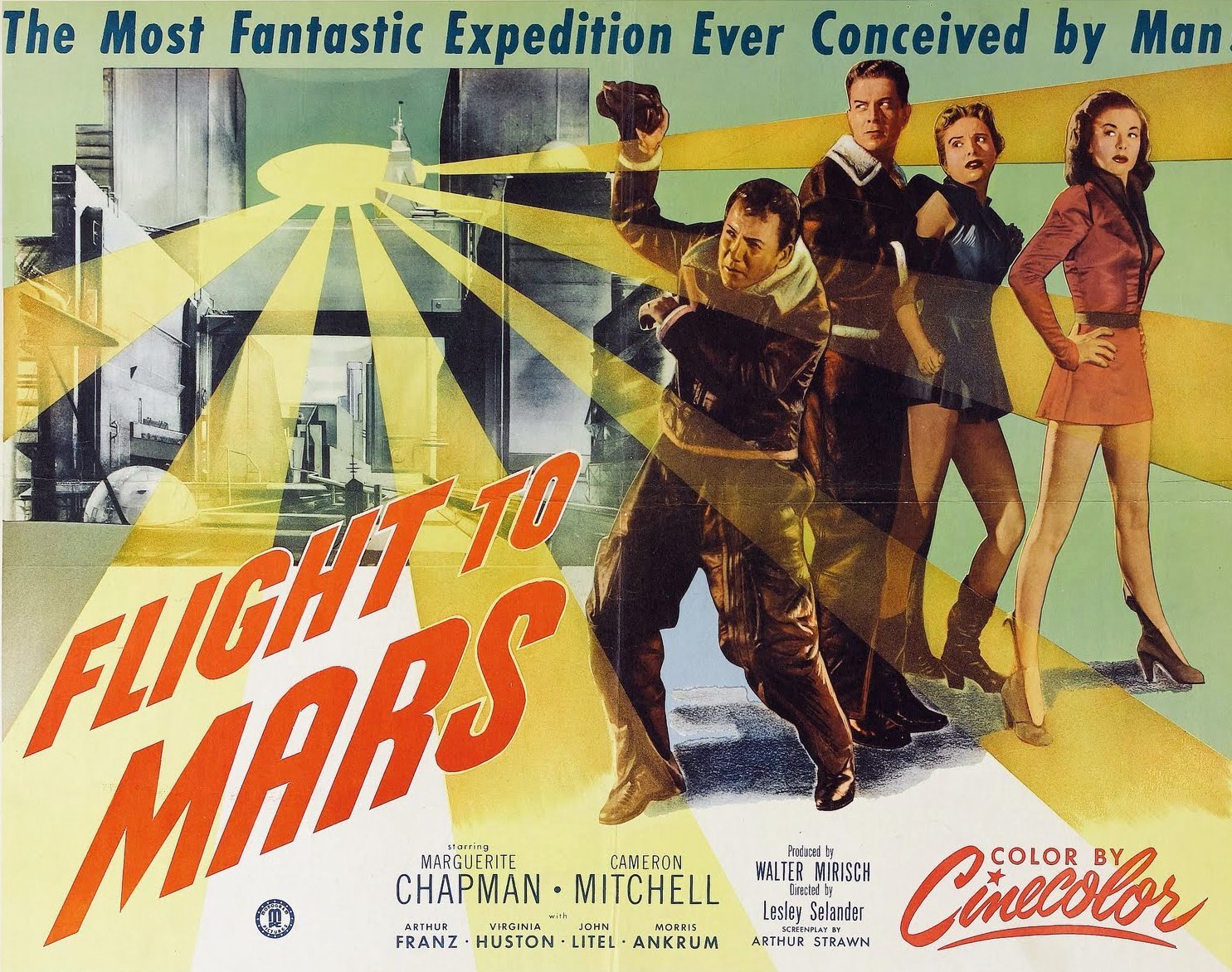 Richard’s Review: I stumbled upon the Mission Mars Collection DVD set at Half Price Books and it is a very odd collection of forgettable old and new films with one true classic (Invaders from Mars). Flight to Mars is that forgettable old flick. It’s ultimately harmless but never really seems to offer much. The science fact seems laughable without ever being fun. Watching old science fiction films, such as Flash Gordon serials, can be a challenge but often still be very enjoyable. However, the script here never really takes off and the movie comes to a screeching halt without even a good wrap-up scene. Worth a watch once but put it low on your list.

Karla’s Thoughts: I enjoyed it but there was no semblance to science fact at all. Life on the ship, the bunk beds for sleeping arrangements and the food they ate are examples of how little they really knew at the time. I found it strange that Mars had all that technology but couldn’t create a radio signal or space travel. The usual message of “Martians are bad” is present here but the ending is horribly rushed. 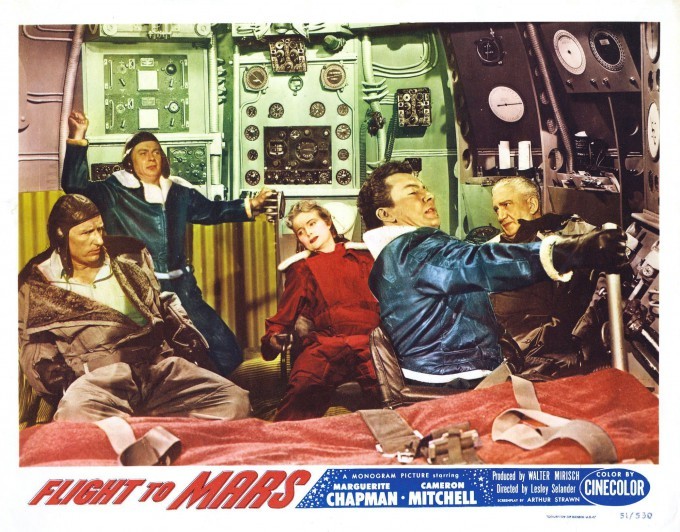 Availability: Flight to Mars was released by Image Entertainment as part of the Wade Williams Collection, both as an individual DVD and in the Mission Mars Collection. Both are out-of-print and selling for an average of $30. However, shop around and I think you can find a better price.