Back in 2012, I launched the Monster Movie Kid blog with a 31 Days of Halloween celebration and a review of Werewolf of London (1935). In the weeks that followed, there was a mix of both classic and contemporary horror films. Every October since, I’ve dedicated the month to a countdown featuring a wide variety of films, including years dedicated to the legends like Boris Karloff, Bela Lugosi and Vincent Price. 2020 will once again feature the 31 Days of Halloween but with a little twist.

Beginning tomorrow, October 1, and lasting all the way through to Halloween, I’m taking a listen to some of the creepiest and most classic radio shows from the golden age. Along the way, we’ll stop off in the 70s for some more recent programming, courtesy of the CBS Radio Mystery Theater. There’ll also be some special surprises and not one but two episodes of the Classic Horrors Club Podcast!

So, I hope you stop by for a visit, turn out the lights and let the theater of the mind take you to faraway places and the darkest corners best left unseen.

This week on episode 683 of the Dread Media podcast, I take a look at a South Korean kaiju flick called Monstrum (2018). I’ll give some credit to Joe Bob Briggs because I saw a trailer for this while watching an episode of The Last Drive-In on Shudder this past summer. It definitely caught my eye and I’m glad I took the chance to watch it. It’s not perfect but there’s a lot more here than your average kaiju flick. Sure, the special effects are a bit questionable at times but it’s well worth checking out.

After last meeting’s part one cliffhanger ending, Jeff and I return with our Fall Preview TV Guides for the 1973 and 1974 seasons.

Take your seat, turn on your TV, adjust the antenna, and join us for episode 48 of the Classic Horrors Club Podcast!

Do you want to share your feedback? It’s easy and all of the cool kids are doing it!

Join us in our clubhouse at https://www.facebook.com/groups/classichorrors.club/!

You can find Jeff at:

Grab your copy of Scary Monsters #118 today as it features a great article, “Novel vs. Film: Conjure Wife and Burn, Witch, Burn”, written by Jeff! Congrats on adding Scary Monsters to your list of publications!

Books to order for the upcoming Halloween season!

This week on episode 682 of the Dread Media podcast, I take a look at another flick Joe Bob introduced this past summer during The Last Drive-In. Scare Package (2020) is a unique and fun horror anthology with a few flaws. It’s not perfect but a of fun, maybe a little more than it should be.

Here is the trailer but, in my opinion, it lacks the fun and originality of the movie. Don’t judge the film by it as it seems like something a studio threw together without really understanding the film. Personally, I think something a little more old school would have been more appropriate.

This month on episode 47 of the Classic Horrors Club Podcast, Jeff and I take a detour on our way home from school to pick up the Fall Preview TV Guide before our subscription issues arrive in the mail two days later. What do we find in its pages for the 1971 and 1972 seasons?

Take your seat, turn on your TV, adjust the antenna, and join this month’s meeting of The Classic Horrors Club Podcast… And, in the tradition of those great two-part TV shows, prepare for a cliffhanger…

Do you want to share your feedback? Maybe you want to let us know what you’ve been doing during the pandemic. It’s easy and all of the cool kids are doing it!

Join us in our clubhouse at https://www.facebook.com/groups/classichorrors.club/!

You can find Jeff at:

Books to order for the upcoming Halloween season!

This week on episode 680 of the Dread Media Podcast, I take one for the team with a film left unfinished for many years…and for good reason. Courtesy of The Last Drive-In with Joe Bob Briggs comes Hogzilla (2014). Please don’t spend a dime on this one other than the subscription cost for Shudder. You’ll thank me later.

This month on episode 71 of the Mihmiverse Monthly Audiocast, the door is open on another edition of the Kansas City Crypt. Over at the Classic Horrors Club Podcast, Jeff and I will be celebrating classic fall season premieres from the early 70s with a look at four made-for-TV flicks. So, it’s only right that I continue with the theme in the Crypt.

Steve Austin, astronaut: a man barely alive
Gentlemen we can rebuild him
We have the technology
We have the capability to make the worlds first bionic man
Steve Austin will be that man
Better than he was before
Better, Stronger, Faster

The Six Million Dollar Man has perhaps one of the most iconic openings of any television show in history. Well, aside from Star Trek that is. However, before the television series launched in January 1974, there were three made-for-TV movies in 1973…The Six Million Dollar Man, Wine, Women and War and The Solid Gold Kidnapping. I take a look at the early beginnings of this classic series and, if you’re not careful, you just might learn something.

While we may not get a traditional theatrical showing of a Mihmiverse film this year, you can still become a contributor of the upcoming films and specials from Christopher R. Mihm. Check out sainteuphoria.com for all of the latest news from the Mihmiverse, including information on The Phantom Lake Kids in The Unseen Invasion!

On June 30, 1951, Alfred Hitchcock’s thriller, Strangers on a Train, was released to great reviews from both critics and audiences. Robert Walker played Bruno Antony, a man who comes up with the perfect way to kill his father when he meets tennis player Guy Haines (Farley Granger) on a train.

Less than six months later, Strangers on a Train was brought to life on radio when the Lux Radio Theater welcomed Ray Milland, who played Guy Haines, and Frank Lovejoy, who assumed the role of Bruno. It had a different tone with the radio setting and different cast members but just as exciting as the original film.

So turn out the lights and enjoy a journey back to the golden age of radio in those thrilling days of yesteryear!

This week on episode 679 of the Dread Media Podcast, I make my grand return after taking the summer off to take a look at a film that was recently featured on an episode of The Last Drive-In with Joe Bob Briggs…Victor Crowley (2017). It’s been a few years since I’ve seen the first three films in the franchise, so tune in to find out how the fourth entry compares. Speaking of Joe Bob, he’ll be back in October with another special episode on Oct. 23, only on Shudder! 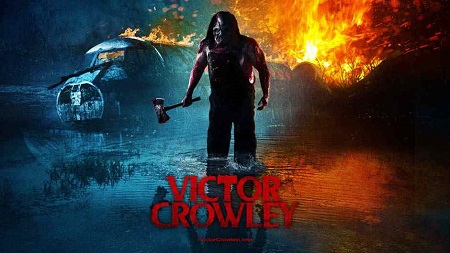