Plot: Dr. Kolos is sent to Earth by an alien race to duplicate humans as part of their plan to conquer the universe. However, Glenn Martin is on to their scheme but can he stop them in time? 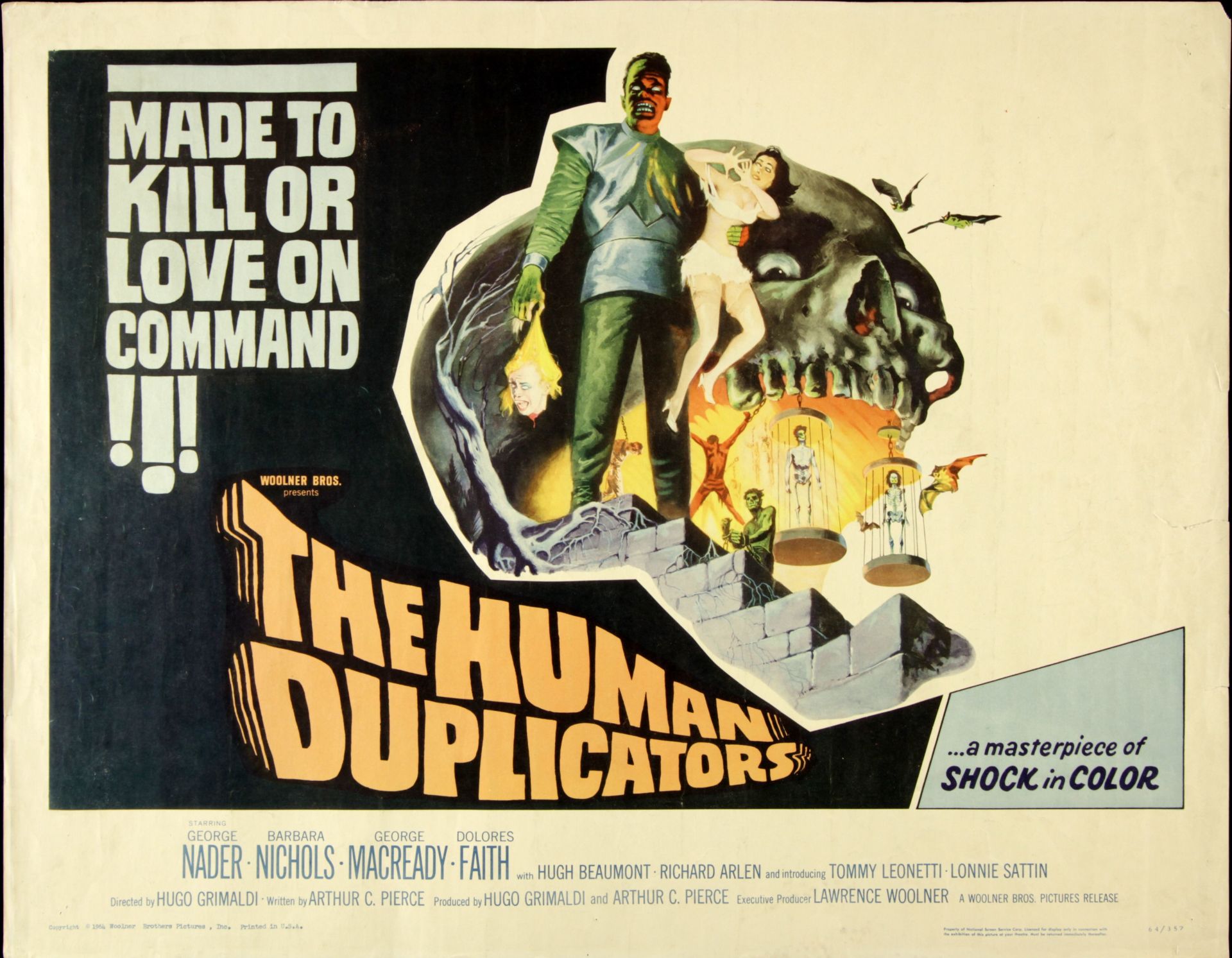 Richard’s Review: This one has been on my “to watch” list for some time now and, unfortunately, it wasn’t quite worth the long wait. Despite a low budget of $140,000, the movie doesn’t actually look that bad. The cast is adequate and nobody stands out as particularly bad. Even Richard Kiel’s lack of acting ability comes across as a positive as it helps make him sound and appear more like an alien to our world. The weakest part of the film is the very slow and relatively boring script. Not much happens in the 80-minute running time. The technique to create humans seems very similar to how robots were created in the Star Trek episode, What Are Little Girls Made Of?, but without the serious flaw that the duplicated humans are essentially walking clay pots. Not a spectacular plan for global conquest. However, there are worse films to watch, so this might be worth it to have on in the background as you do something more exciting.

Karla’s Thoughts: The movie wasn’t that bad but the script was horrible. It could have been a little better with a more talented actor in the role of Kolos. The duplicated humans made absolutely no sense. How could they be made of clay yet their hands and face moved like a normal human? How could they be impenetrable to bullets yet break apart if they fall on the ground? It could have been more fun with a much better script. 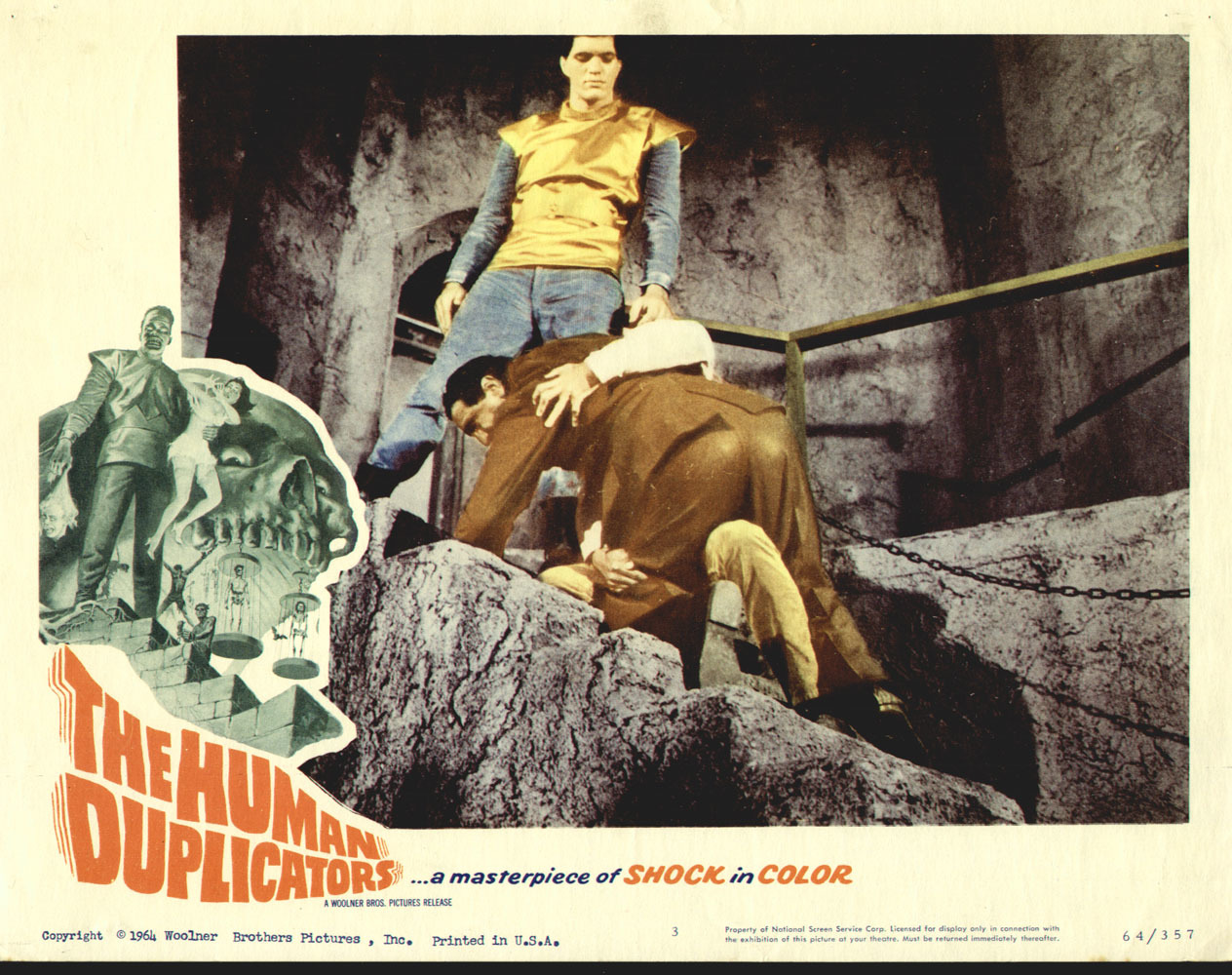 Availability: The Human Duplicators is currently unavailable on DVD but you can find copies of varying degrees in quality on YouTube.

Jeff Owens, my co-host on the Classic Horrors Club Podcast and man behind the Rondo Award nominated Classic Horrors Club blog, appears in the newest issue of We Belong Dead magazine. In his latest article, The Strange Romance of Dr. Jekyll and Mr. Hyde, Jeff takes a look at the various versions of the classic novella by Robert Louis Stevenson. He moves beyond the surface of the story into the romantic subtexts and character motivations. I highly recommend you check out issue 20!

We Belong Dead magazine is available online from the publishers of the amazing books Unsung Horrors, Son of Unsung Horrors and A Celebration of Peter Cushing. All of these are in my personal collection and should be in yours as well. With issue 20, We Belong Dead has expanded from a digest size to a full magazine. However, the format remains unchanged and is still in full-color with amazing images cover-to-cover. Check it out and tell ’em Monster Movie Kid sent ya!

Screenplay by Lorenzo Sample Jr.
Adapted by Michael Allin
Based on the characters created by Alex Raymond
Produced by Dino De Laurentiis
Directed by Mike Hodges

Plot: Emperor Ming the Merciless becomes bored and decides to toy with the planet Earth, causing natural disasters and planet-wide calamity. When a plane carrying football star Flash Gordon and Dale Arden crashes into the laboratory of Dr. Hans Zarkov, they stumble into an adventure they takes them to the planet Mongo and into the clutches of Ming and his daughter, Princess Aura. Can Flash stop Ming before he destroys Earth? 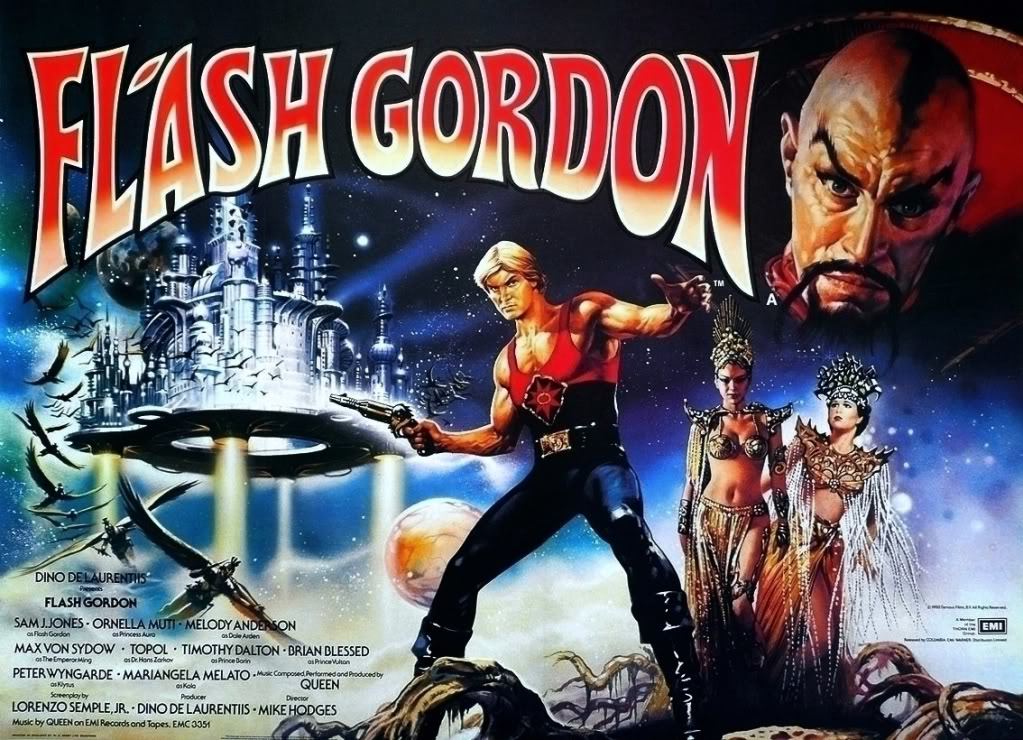 Richard’s Review: I first discovered Flash Gordon through the original chapter serials in the late 70s. When we got cable, channel 41 out of Kansas City played a chapter every Sunday morning. As a young sci-fi fan, I was hooked. Buster Crabbe was heroic and Charles Middleton was delightfully evil as Ming the Merciless. Surprisingly, I didn’t discover the 1980 film until several years after it’s’ release and, once I did, I was disappointed. While I loved the music of Queen, the best part of the film in my opinion, Sam Jones’ lack of acting ability was overshadowed in my mind by Buster Crabbe. Admittedly, Crabbe was not incredibly talented either but he was more engaging.

Max Von Sydow does a great job as Ming, channeling Charles Middleton in performance and appearance, while Topol’s performance seemed a little more mean-spirited at first than he needed to be. The low-budget special effects looked even worse when compared to the recent Star Wars and Star Trek films at the time. There is also too much humor, resulting in a campy film when the characters were never intended to be treated that way. It’s become a big cult classic over the years but this revisit still failed to impress me.

Karla’s Thoughts: The special effects are atrocious, the costumes leave a lot to be desired and the acting could be better. However, I still love the movie for all of it’s’ flaws. The story is good and the music from Queen is amazing and awesome. The movie is so cheesy but you can’t help but love it anyway.

Availability: Flash Gordon is available on Blu-ray for less than $10. It lacks a lot of extra features but you can’t beat the low price.

Disclaimer: We experienced some technical difficulties during the first 8 minutes or so of our conversation with Steve.  Please be patient; they are soon resolved.

Like what you hear?  Even if you don’t, please consider leaving us an honest review on iTunes.

Next month on episode 21, we celebrate the films of Bela Lugosi.

Plot: An astronaut brings home a strange green glowing orb as a gift for his daughter. Upon his death, the orb reveals itself to be the embodiment of all evil and proceeds to share stories with the girl about all the worlds it has traveled to. 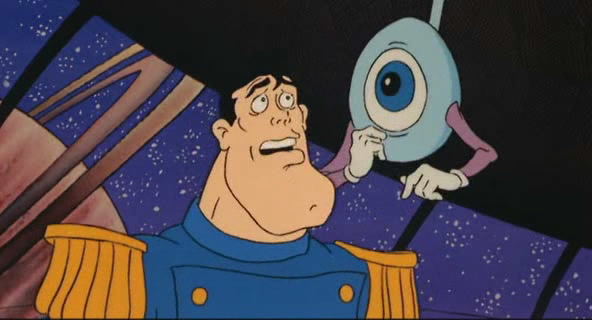 Richard’s Review: I have fond memories of this one from the 1980s when it seemed to be on constant rotation on HBO. The rock music soundtrack and the bizarre science-fiction and fantasy stories captured my imagination. With horrific creatures at every turn, the erotic and sexy female characters didn’t hurt any either. While the overall presentation seems a little dated today, the extras remind you just how much time and effort went into the production of the film. This type of animated adult storytelling really doesn’t exist today except in anime, which is a different style altogether. Well worth revisiting if you’re in the mood for a nostalgic trip. 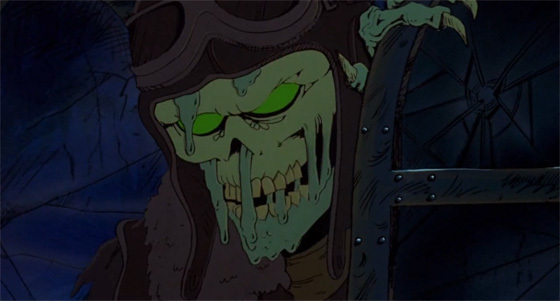 Availability: Heavy Metal is available on Blu-ray for less than $10. While the audio could use an upgrade, it’s a great bargain for the price.

This week on episode 567 of the Dread Media Podcast, I take a look at the recent Jurassic World: Fallen Kingdom (2018) starring Chris Pratt and Bryce Dallas Howard. Does it have the magic and wonder of the original? As always, be sure to tell ’em Monster Movie Kid sent ya!

Plot: Scientist Eric Zinthrop has found the fountain of youth in jelly taken from queen wasps. Enter cosmetics powerhouse Janice Starlin who needs to look younger so she can continue to be the face of her company before sales continue to drop. When she overdoses on the drug, the youth drug becomes the sting of death as she transforms in a wasp creature. 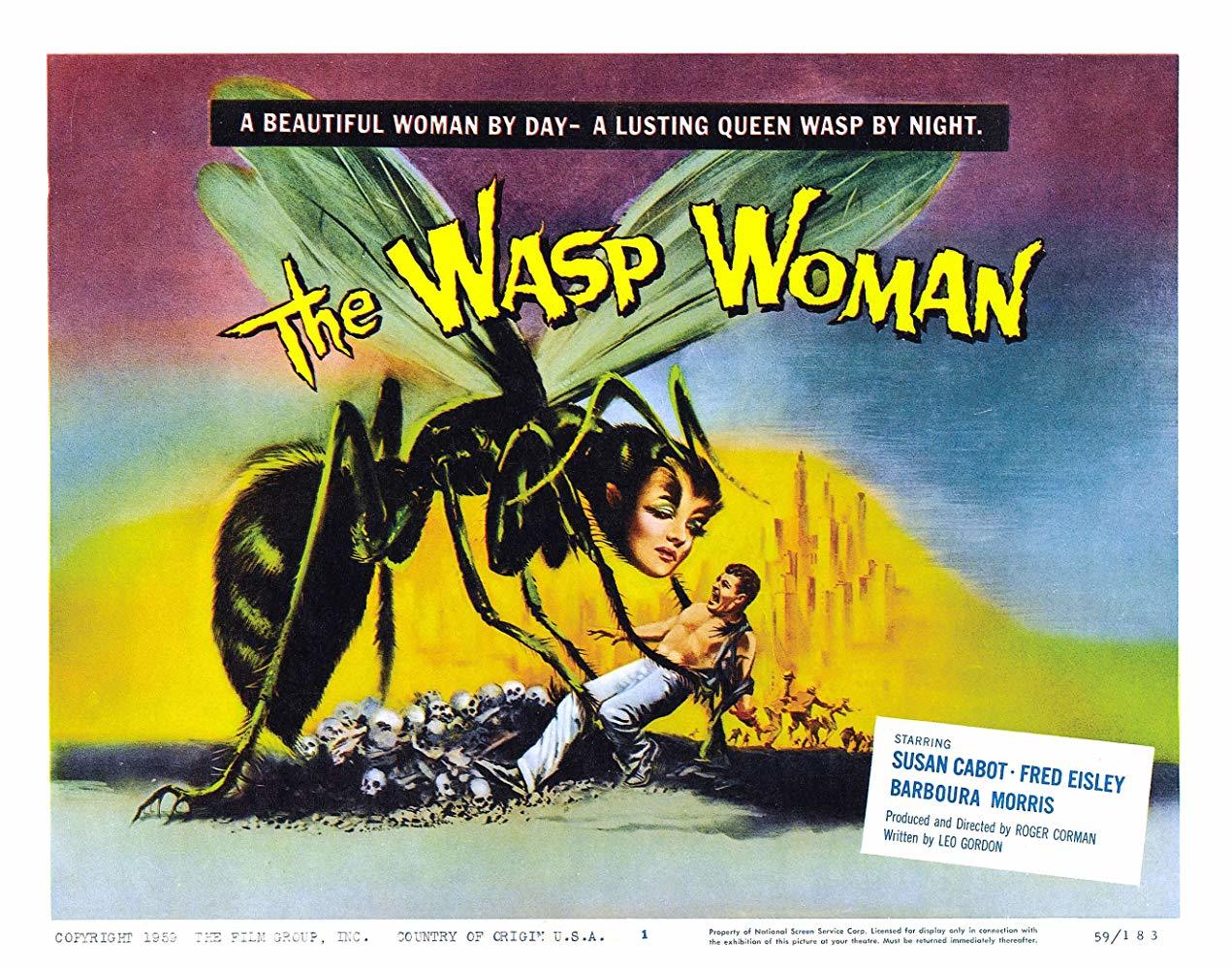 Richard’s Review: This is definitely not one of Roger Corman’s better films. It suffers from cheap interior sets and a very lackluster script. With other films like these, flaws can be overlooked by the fun of the monster or a good cast. However, the cast doesn’t shine and the creature is rarely seen. When it does appear, the poor lighting makes it barely visible. With extra footage to flesh out an already poor script, there isn’t too much to say on this one. It’s not horrible, just forgettable, which is really a bigger kiss of death for any film.

Karla’s Thoughts: I didn’t care for this one at all. It was poorly made with bad special effects and a ridiculous script with a silly concept. The ending was also way too abrupt. I wouldn’t watch this one again. 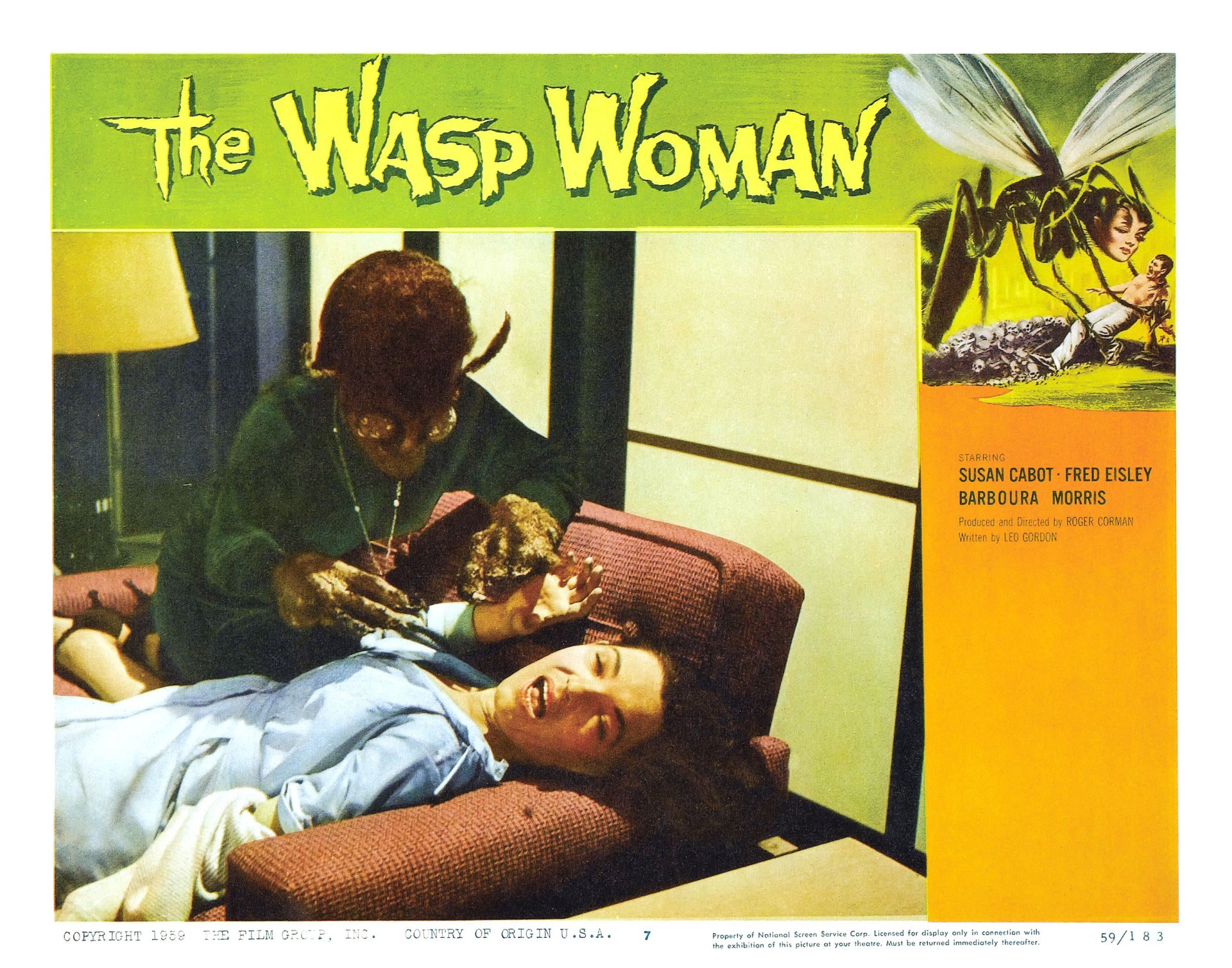 Availability: The Wasp Woman is in the public domain and can be found for free everywhere. However, it is on Blu-ray paired with Beast from the Haunted Cave if you want to add it to your collection.

Plot: Atomic bomb tests in New Mexico have created a mutation among common ants, resulting in giant monsters threatening to wipe out mankind unless a scientist and the military can find their nest before the next batch of eggs hatch. 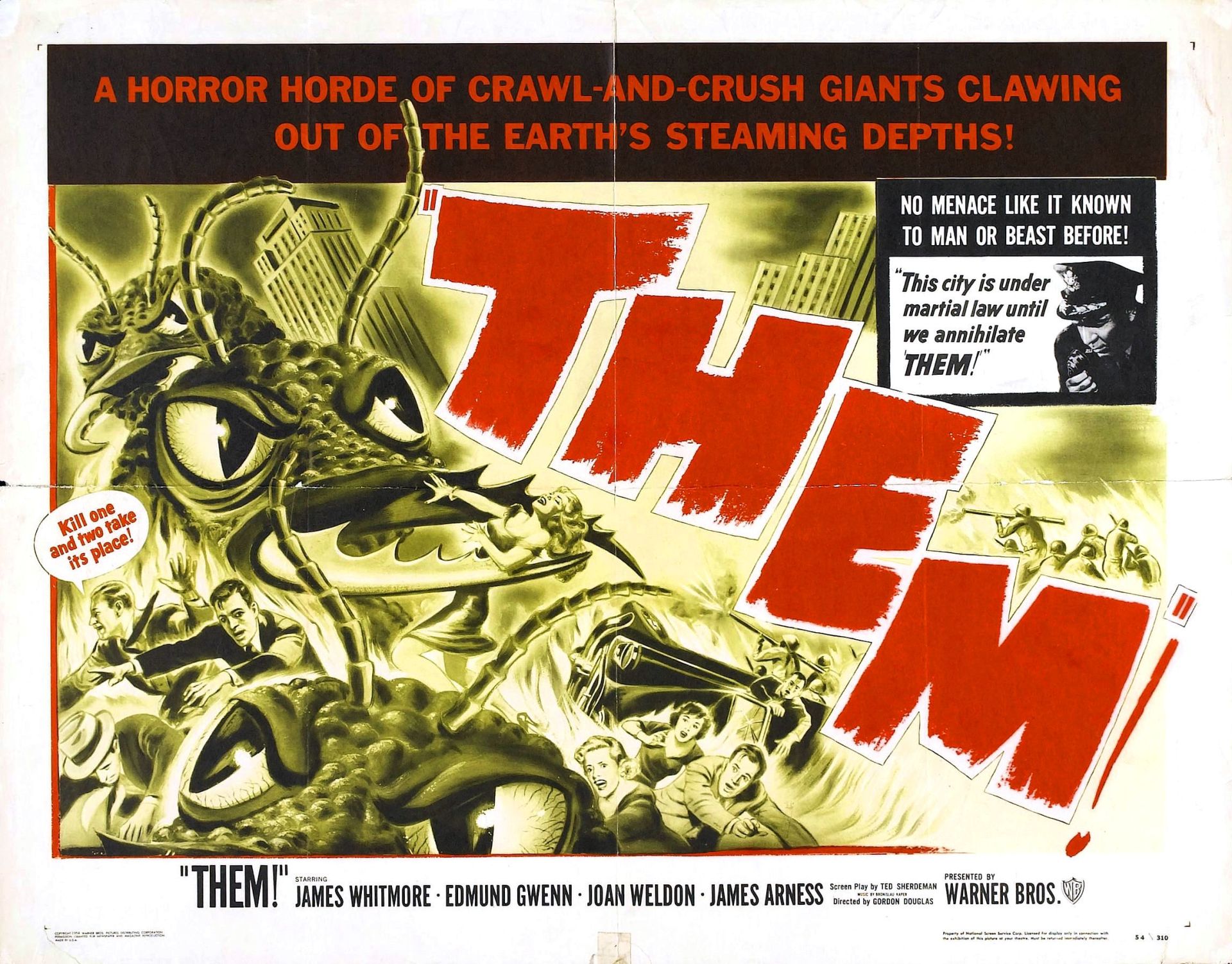 Richard’s Review: Them! is by far the best of the giant bug films of the 1950s. Warner Brothers put forth a lot of effort into making this movie feel on par with other non-horror or sci-fi films. You have a solid script which gives us a slow build to the reveal of the creatures against the mysterious desert backdrop. The ants are seen just enough to make them believable but never too much to reveal their technical flaws, which admittedly are few. Sure, there may be a plot hole or two along with a moment where belief has to be suspended but they are rare and really don’t detract from the overall enjoyment of the film.

Edmund Gwenn’s presence always throws me a little because I see him as Kris Kringle in Miracle on 34th Street (1947) every year. That said, he gives a mix of wise old scientist and grandfather to his portrayal of Dr. Harold Medford that enhances every scene he is in. I also appreciated how the now clichéd romantic plot point is avoided between Graham and Patricia Medford. We get a few random lines along with a glance or two but nothing more.

I highly recommend Them! as the premiere of all 50s atomic bug flicks. It’s a solid fun-filled ride from start to finish. 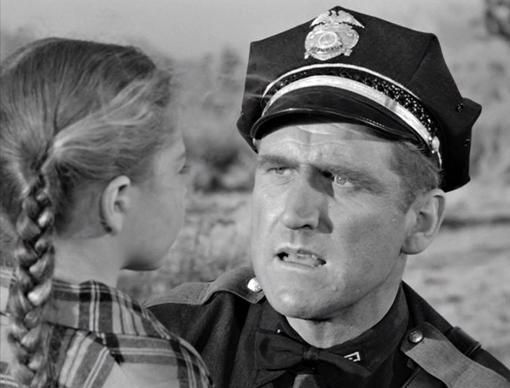 Karla’s Thoughts: I loved Them! as I thought the story was great and the ants were realistic, at least as much as giants could be. Thought was put into explaining their existence and habits, as well as how atomic bombs were to blame for their creation. I wish the ending of the film wasn’t so rushed as I wanted to see the kids reunited with their mother. I also could see how there could have been a sequel based on the vague ending. I will definitely watch this one again. 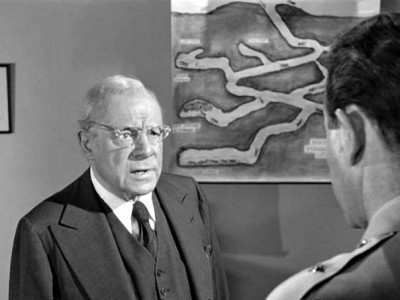 Availability: Them! is available and reasonably priced on Blu-ray. It’s a definite must for your collection.

The Kansas City Crypt is open again and this month on episode 45 of the Mihmiverse Monthly Audiocast, the Monster Movie Kid talks about John Agar and The Brain Planet from Planet Arous (1957)!