Every year since the Monster Movie Kid site launched in 2012, I’ve counted down to Halloween, the greatest time of the year! And for all but one of those years, I’ve posted a movie review every single day of the month…and 2018 will be no exception!

This year, my wife Karla will be joining me for most of the reviews to share her thoughts and most of the films will be first time viewings for both of us. I’ve decided to go to my huge to watch pile and knock off a level or two. Between now and Halloween, there will be Paul Naschy and Santo, Mexican vampires, some first time to video release and some of horror legends too. Plus, I’ll be appearing on three different podcasts this month to share my thoughts on Hammer Films, the latest from the Mihmiverse and the Bloodthirsty Trilogy from Japan.

Once again this year, I’ll be an official Cryptkeeper over at the Countdown to Halloween website. Be sure to check it out for the list of other participating sites (coming soon), including my good friend Jeff Owens over at the Classic Horrors Club!

So buckle in and let’s get ready to celebrate Halloween 2018!

This week on episode 578 of the Dread Media Podcast, I take a look at the latest entry in The Conjuring franchise, The Nun (2018)! Tune in and let ’em know Monster Movie Kid sent ya!

Plot: On the planet Ygim, humans are called Oms and are pets/slaves to the giant blue alien Draags. When one human known as Terr begins using a teaching device, he becomes educated and takes the first steps towards leading a revolt of the Oms against their masters. 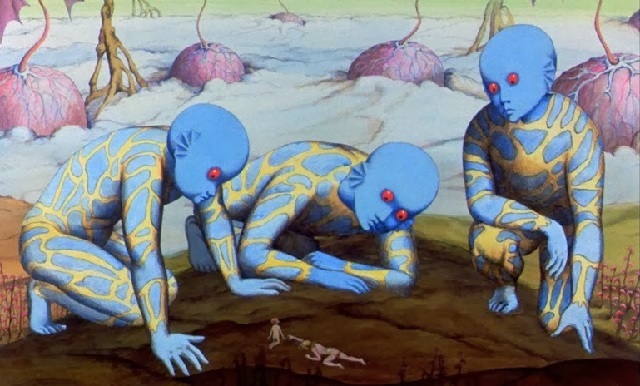 Richard’s Review: Ever since I first watched Fantastic Planet on HBO back in the 80s, I’ve been hooked by the odd nature of this film. Now, with an older and wiser cinematic eye, I can clearly see it as an allegory, but for what is still the question. Is it about racism or is it about animal abuse? Or something else altogether? I think that’s what makes this flick special in that it can be interpreted many different ways depending on the viewer’s frame of mind at the time of watching as well as their personal life experiences.

The story is essentially a simple one surrounded by wild images on a very alien world. Just one viewing isn’t enough to truly capture all the subtle strange surroundings. I truly enjoyed the adventure but there are some obvious plot holes surrounding how the humans could use the Draag technology to their advantage that did pull me out of the moment once or twice. The film also wraps far too quickly after dragging the story out to feature length. The characters deserved more development and a more detailed conclusion than a narrated wrap-up. That said, I highly recommend you check it out more than once as there’s a lot to take in and interpret for yourself.

Karla’s Thoughts: I have to start by saying that I didn’t like this one. I couldn’t get past the fact that it felt like a Monty Python flick. The animation was too weird and Pythonesque for me and there wasn’t enough science fiction to the story. There were a lot of strange images and a violent storyline plus plot elements that didn’t make sense to me. Not a fan of this one.

Availability: Fantastic Planet is available on Blu-Ray as part of the Criterion Collection. Be sure to watch the extras on artist Roland Topor.

Plot: In the year 2087, the world is controlled by corporations and free thought is illegal. A resistance group sends a cyborg back in time to 1966 to prevent the creation of a device that will lead to mass thought control.

Richard’s Review: I’ve never heard of this film before a few years ago and I’m amazed it’s not more well-known due to the similarities to The Terminator.The cyborg is a mix of Kyle Reese (who tried to change the timeline) and the Terminator (who tried to keep it intact). I know Harlan Ellison sometimes get credit but this had to have inspired James Cameron at some point.

I love Michael Rennie and he’s good here but a little subdued. Yet, he’s supposed to lack emotion, which may explain his sometimes droll performance. It was nice to see some familiar Star Trek faces and the action was fun but there wasn’t quite enough plot for the running time. It would have been much better within a 75-minute time frame or even an hour. The special effects budget is a little low but it doesn’t pull you out of the moment. I really enjoyed this flick and recommend you give it a chance.

Karla’s Thoughts: I really enjoyed this one, especially as it’s obvious to see where it inspired The Terminator. The cast did a great job and the story was fun but it did drag on in places. It took a while for the story to get started and it seemed like the chase scene went on a little too long. But it had a happy ending so I’d definitely watch it again.

Availability: Despite a lack of extras, Cyborg 2087 looks great on Blu-ray from Kino Classics.

Plot: Set in the futuristic world of 1990, an alien race makes contact with Earth. However, when their spaceship crashes on Mars, earth sends a rescue mission only to find it’s a trap. They find a deadly alien queen who hypnotizes her victims before draining them of their blood. Will the crew survive the trip home and stop a possible alien invasion? 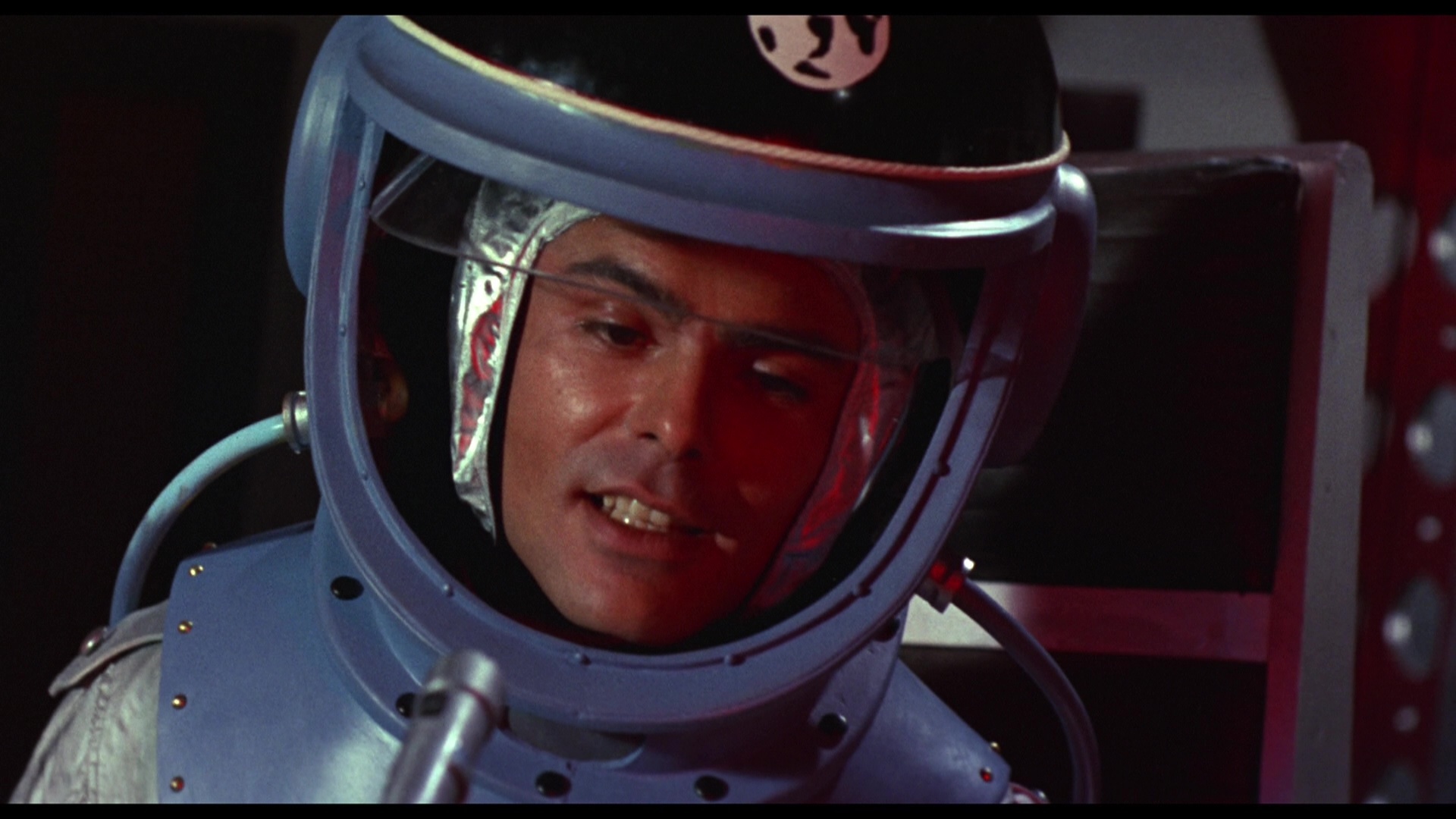 Richard’s Review: Queen of Blood is a fun afternoon matinee flick despite it’s now dated 1990 timeline. I’ve always loved watching John Saxon and he’s great here as usual but I wish he could have been given a little more to do. Rathbone turns in a respectable performance for one of his last films and it’s always interesting to see a pre-drugged out Dennis Hopper. The special effects fit in fairly well with the movie despite being pulled from two other Russian films and the occasional blooper (“USSR” is clearly visible at one point despite the space ship coming from the United States). Letting an unknown alien queen roam free on the ship isn’t the smartest choice, especially after she is known to have killed a crewman. But we can all sleep safely at night knowing science can be trusted…can’t we? Very entertaining and well worth checking out despite some flaws!

Karla’s Thoughts: Why the astronauts let an unknown alien run loose on the ship, especially after she killed, is beyond me. And how did she have enough time to lay all those eggs? I enjoyed the movie enough but there were too many weak plot moments, so I don’t think this is one I will be revisiting any time soon. 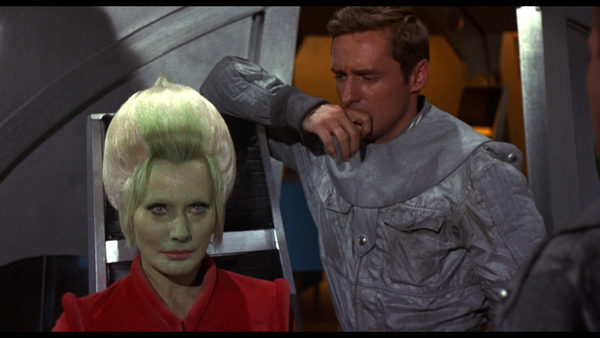 Availability: Queen of Blood looks great on Blu-ray from Kino Lorber and is available on Amazon.

The Kansas City Crypt creaks open once again and this month on episode 47 of the Mihmiverse Monthly Audiocast, the Monster Movie Kid talks about the crazy Bender family from the bloody Kansas past. Their story has been brought to life in an amazing graphic novel, Bender, written by Michael Frizell and illustrated by D.A. Frizell. The collected saga is now available on pre-order on Amazon!

Be sure to check out the online home of the films of Christopher R. Mihm for all of the great merchandise and information on how you can help make future films happen! Guns of the Apocalypse will be making it’s world debut on September 26 and DVDs are now available for pre-order!

Plot: An earthquake in the Salton Sea releases prehistoric mollusks on the nearby Naval base and community. Can they be stopped before reaching the canal that would allow them to terrorize the world?

Richard’s Review: This isn’t one of the greatest giant monster flicks of the 50s but not one of the worst either. The giant mollusk doesn’t seem that threatening once out of the water but I’ll admit, it would terrify me underwater. The main lead of Lt. Commander Twillinger has to be one of the most unlikeable leading men at the start of the film. Thankfully, he softens up a little as the story progresses and he begins to romance Gail and win over her daughter. As with most giant monster flicks, it wraps everything up swiftly at the end. It’s definitely a nice afternoon matinee or late night movie choice.

Karla’s Thoughts: Once I was able to get past the impracticality of the giant mollusks, I actually enjoyed this one and would watch it again. It’s definitely a turn your brain off at the door type of movie but it worked. 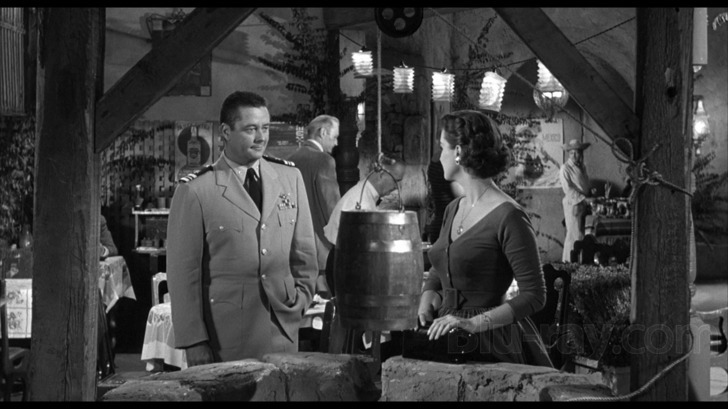 Availability: The Monster That Challenged the World is available on Blu-ray from Kino Lorber. There is an audio commentary from Tom Weaver but not much more. However, it’s well worth adding to your collection.