Plot: When his max museum is burned down, creator Professor Henry Jarrod survives to once again open a new museum. But where does he find the lifelike bodies? 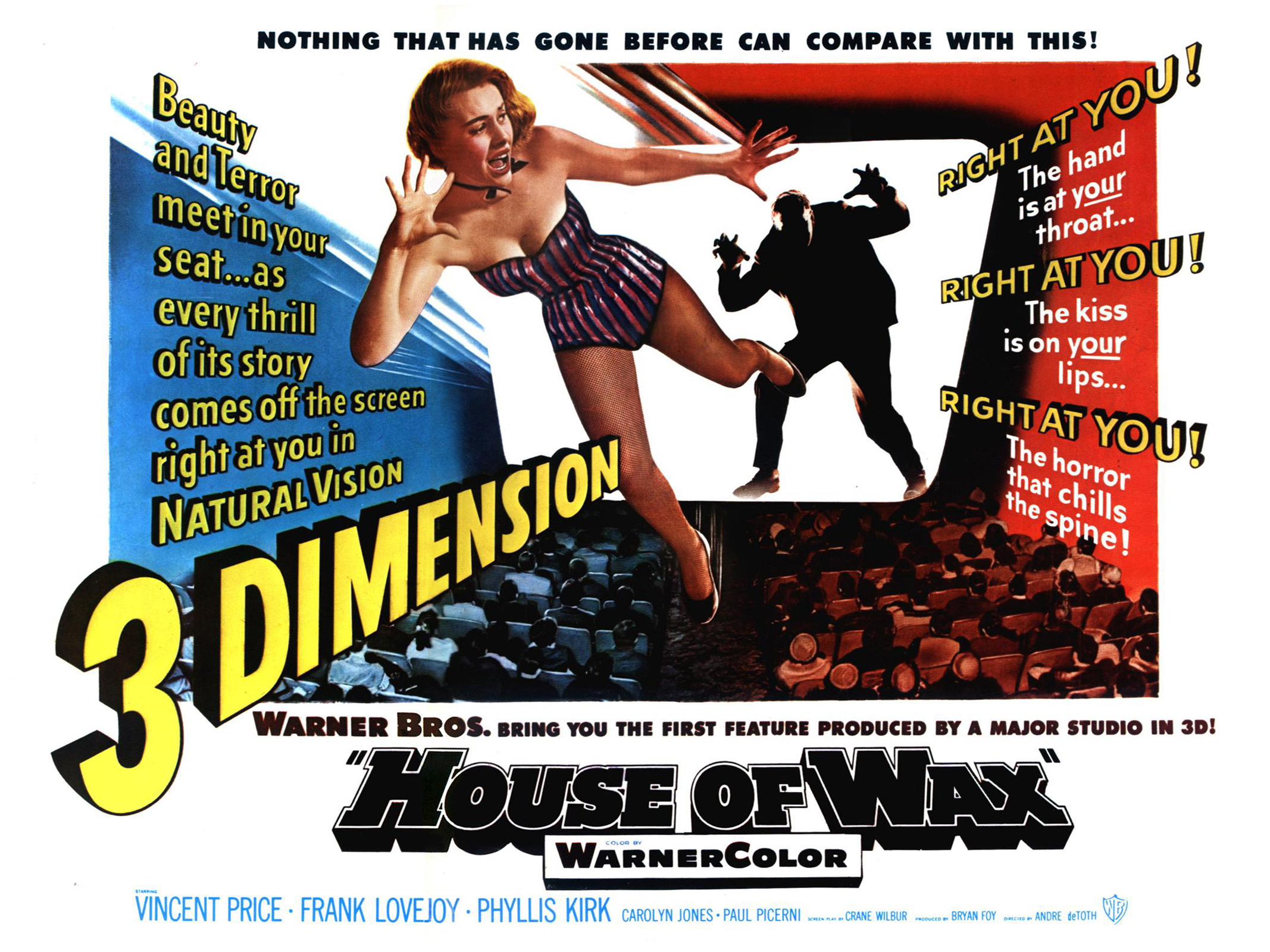 Richard’s Review: Having just watched Mystery of the Wax Museum (1933) a few months ago, it was interesting to watch House of Wax and do some compare and contrasting. Personally, I prefer Price over Lionel Atwill but there was less mystery here as to who was the scarred man. I kind of missed the reporter role but the vivid colors here are spectacular. But I could have done without the somewhat annoying barker segment, placed to utilize the 3D effects. Beautifully filmed, this is truly one of Vincent Price’s masterpieces. Highly recommended!

Karla’s Thoughts: I loved House of Wax as Vincent Price was awesome in one of his best roles. The colors were amazing. It is definitely different at times from the original, such as in the prolonged opening sequence and the lack of the reporter role. The lead actress here had so much more to do than Fay Wray in the original because of the way the story revolved around her more. I would definitely watch this one again. 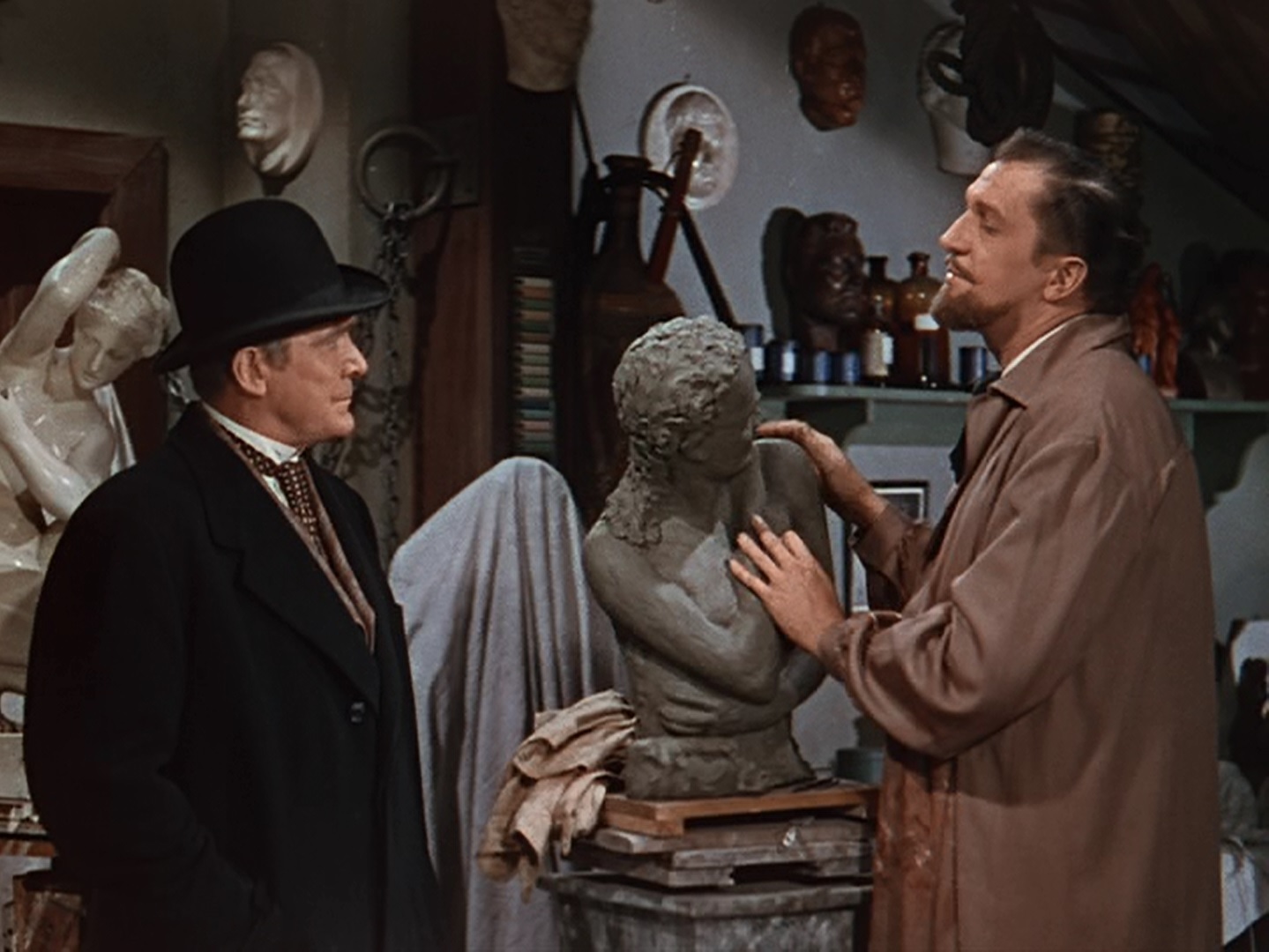 Availability: House of Wax is available on Blu-ray from Warner Brothers, which also includes Mystery of the Wax Museum (1933).

Based on a short story by Edgar Allan Poe
Screenplay by Charles Beaumont & R. Wright Campbell
Directed by Roger Corman

Plot: When Prince Prospero discovers the Red Death has arrived in a nearby village, he takes the lovely Francesca to his castle where he and his guests worship Satan and partake in sins of the flesh. However, the mysterious Man in Red has other plans. 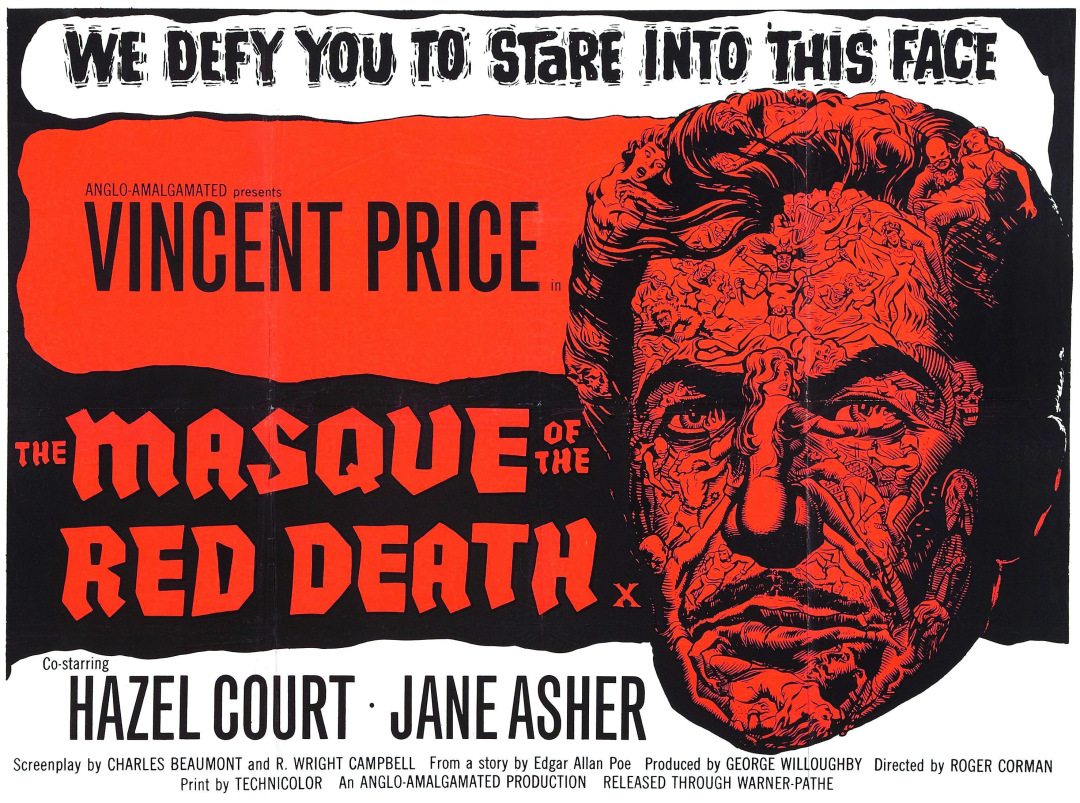 Richard’s Review: I absolutely love this film and it’s one of my favorites of Vincent Price. He is so deliciously evil as Prince Prospero. The cast of oddball characters surrounding him are entertaining, especially Hop Toad, whose mannerisms and dialogue made me think of Tyrian from Game of Thrones. However, I have to say I was a little disturbed by Esmerelda being played by a young girl as Alfredo stared at her in lust. Aside from that odd moment, the movie is dark and wicked…and I love it.

Karla’s Thoughts: Vincent Price was amazing and flawless but I really hated to see him play such an evil role. The story was good but a little too dark for me at times. The senseless deaths, such as killing the villagers, and taking pleasure from watching others suffer, was a little hard to watch. This is a really good movie but I’d probably not watch again because it was too dark.

Availability: Masque of the Red Death was available on Blu-ray as part of The Vincent Price Collection I. However, unless you already have it in your collection or have a spare $400 lying around, your better bet is to find the out-of-print Midnite Movies DVD but be patient as you shop around for the best price (pun intended).

Plot: Verden Fell buries his wife Ligeia and becomes a recluse until he meets the lovely Rowena. Upon marrying her, old memories and a promise from his late wife that she’d never die continues to haunt him. 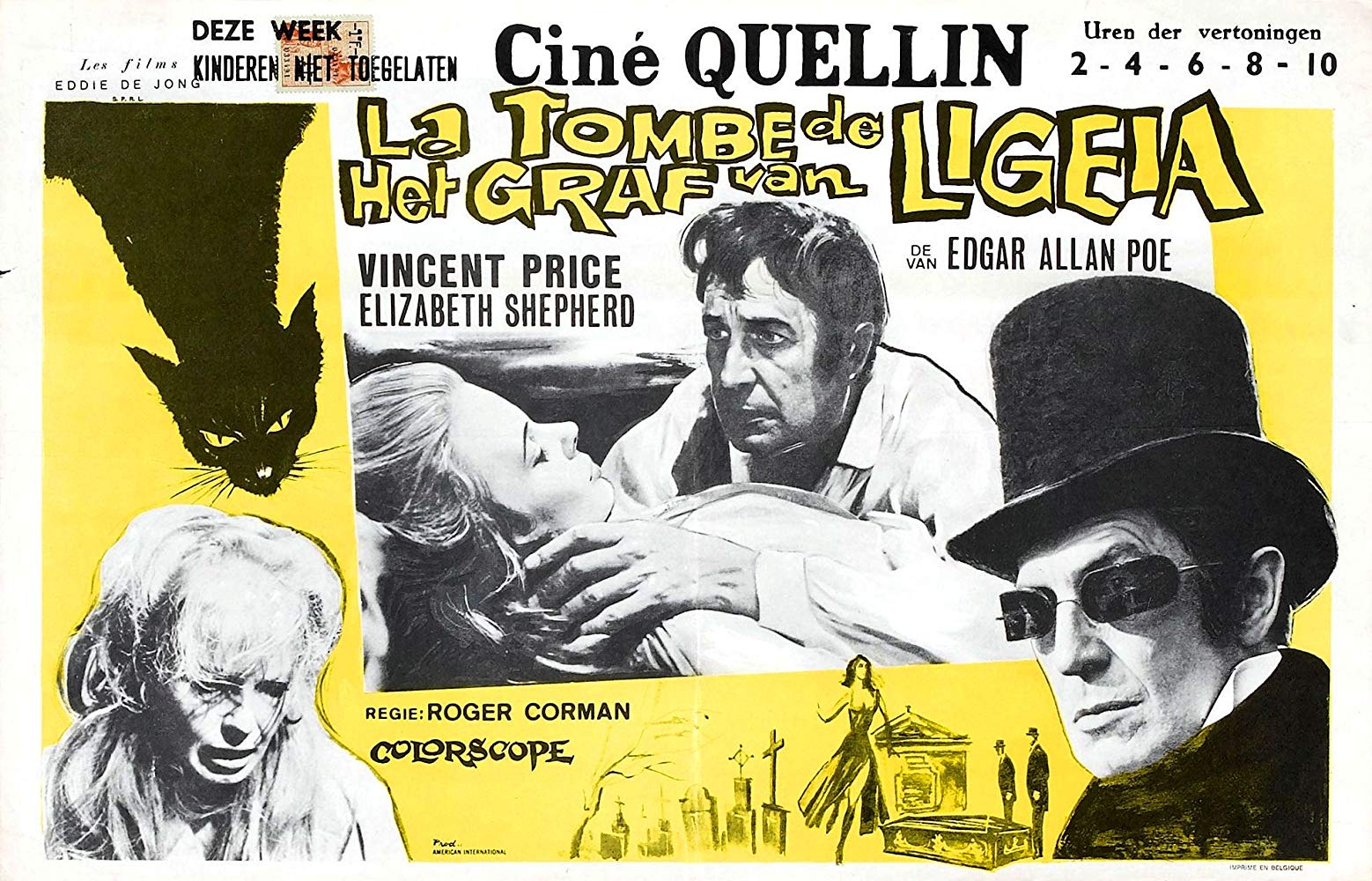 Richard’s Review: The location shots make this the brightest and perhaps most real-world of all of Roger Cormen’s Poe flicks. Price is great as always and while Elizabeth Shepherd seemed closer in age to Price than some of his other co-stars, I personally don’t think they had the chemistry needed to convincingly pull off the romantic angle. However, the good script, despite its’ odd plot contrivances, works to tell an entertaining story. It’s definitely a fun and atmospheric movie for the Halloween season.

Karla’s Thoughts: I really liked The Tomb of Ligeia but sad that it didn’t have that happy ending of them being together. Price was great and I really liked Elizabeth Shepherd . I loved the exterior shots but struggled with the lack of accurate science. It was also weird that they randomly pulled Egyptian lore into it, along with a lot of other seemingly random supernatural elements. But, I did enjoy it overall and I would definitely watch it again.

Availability: Tomb of Ligeia is available on Blu-ray as part of The Vincent Price Collection II.

This week on episode 635 of the Dread Media Podcast, our Countdown to Halloween continues with one of Vincent Price’s last films, From a Whisper to a Scream (1987)! It’s not a classic but definitely better than some of his previous horror efforts in the 80s.

On episode 634 of the Dread Media Podcast, I walk into dangerous territory with one of Vincent Price’s hardest to find films, Escapes (1986)! This film is practically lost and, honestly, it should be. Don’t say you haven’t been warned!

After recording this segment, I did discover that Escapes has been released on Blu-ray as an extra on the Dark Harvest (1992) release. Or you could just watch it for free on YouTube.

Based on the novel by R. Chetwynd-Hayes
Screenplay by Edward & Valerie Abraham
Directed by Roy Ward Baker 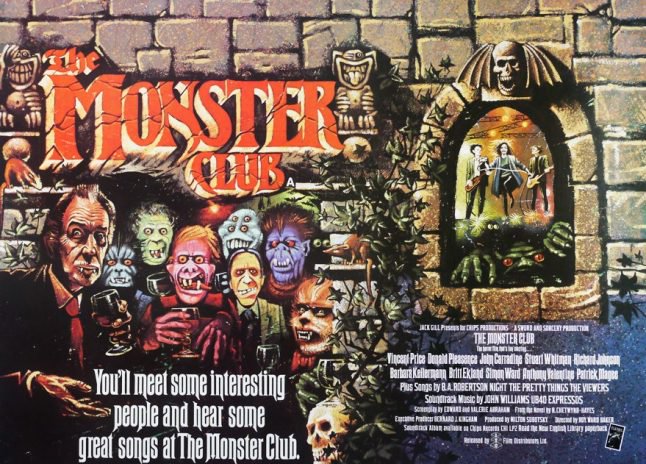 Richard’s Review: This movie seems very out-of-place for 1981 as the simplicity would have worked better in the 60s or 70s. The 80s flavored rock music is an obvious attempt to appeal to a then modern audience that might have considered the film old fashioned, which it really was by 1981 standards. That said, its’ quirkiness adds to its’ charm and I enjoy this one a little more with each viewing. Price outshines John Carradine at every turn in a rather interesting framing story. The second story seems a little out of place as it’s more comical while the final segment is quite creepy indeed. Not a classic but definitely worth checking it.

Karla’s Thoughts: This isn’t a horrible movie and I liked Vincent Price as usual. However, the weird 80s rock music and obviously fake monsters make the club sequences very odd at best. As an anthology, it’s well-written with the last story being the creepiest and the vampire story the weakest. It was fun to watch and I’d probably watch it again if it popped up on TV. 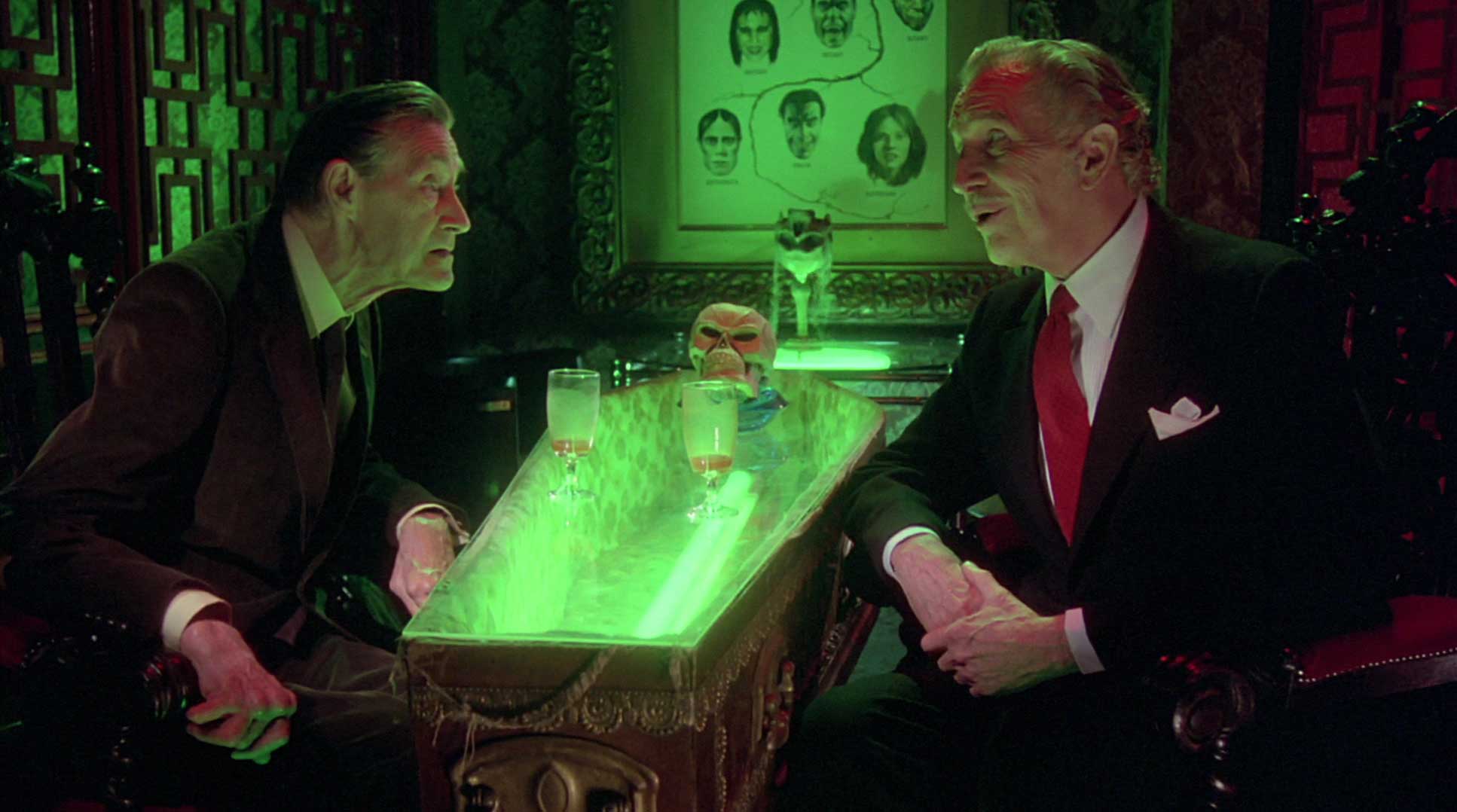 Availability: The Monster Club is available on Blu-ray from Ronin Flix.

Plot: Paul Toombes has played the character of Dr. Death on-screen for years but suffers a nervous breakdown after finding the murdered body of his fiancée. After years in an institution, he returns to once again play the role but when cast and crew begin to die, he questions his sanity as all leads point to him. 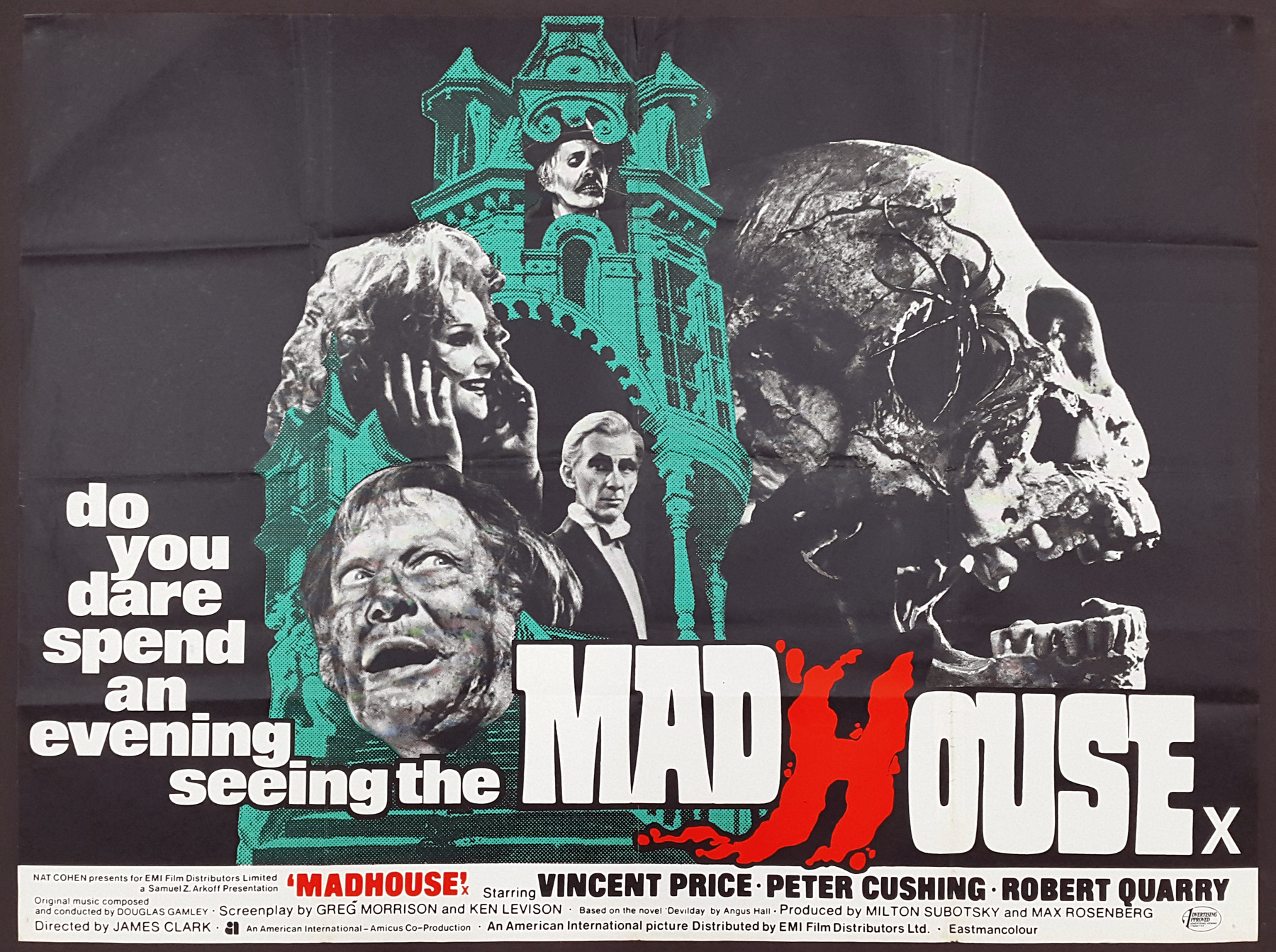 Richard’s Review: I’ve warmed up to this one a little more over the years. Price is fun but I don’t think he’s up to his usual standards. It was fun to see him and Peter Cushing finally work together but it was sad to see them on opposite sides. I loved seeing the various old clips interspersed throughout the film. However, I didn’t care for the character of Faye Flay. Sorry, not a big fan of spiders. I’d definitely watch this one again but it isn’t one of my personal favorites.

Karla’s Thoughts: I really enjoyed Madhouse but it was kind of sad to see Peter Cushing play the villain. I really wanted to see him and Vincent Price work together not against each other. Price was great as usual. The young girls’ guardians at the beginning of the film seemed a little odd and out of place and there was an odd lack of police presence throughout the film. Not a great film but still fun. I wouldn’t seek it out but would definitely watch it if it popped up on TV.

Availability: Madhouse is available on Blu-ray from Kino Lorber.

Plot: Actor Edward Lionheart apparently commits suicide after being ridiculed by a group of theater critics. However, he’s very much alive and, with the help of his daughter, begins a series of revenge murders based on the works of William Shakespeare. 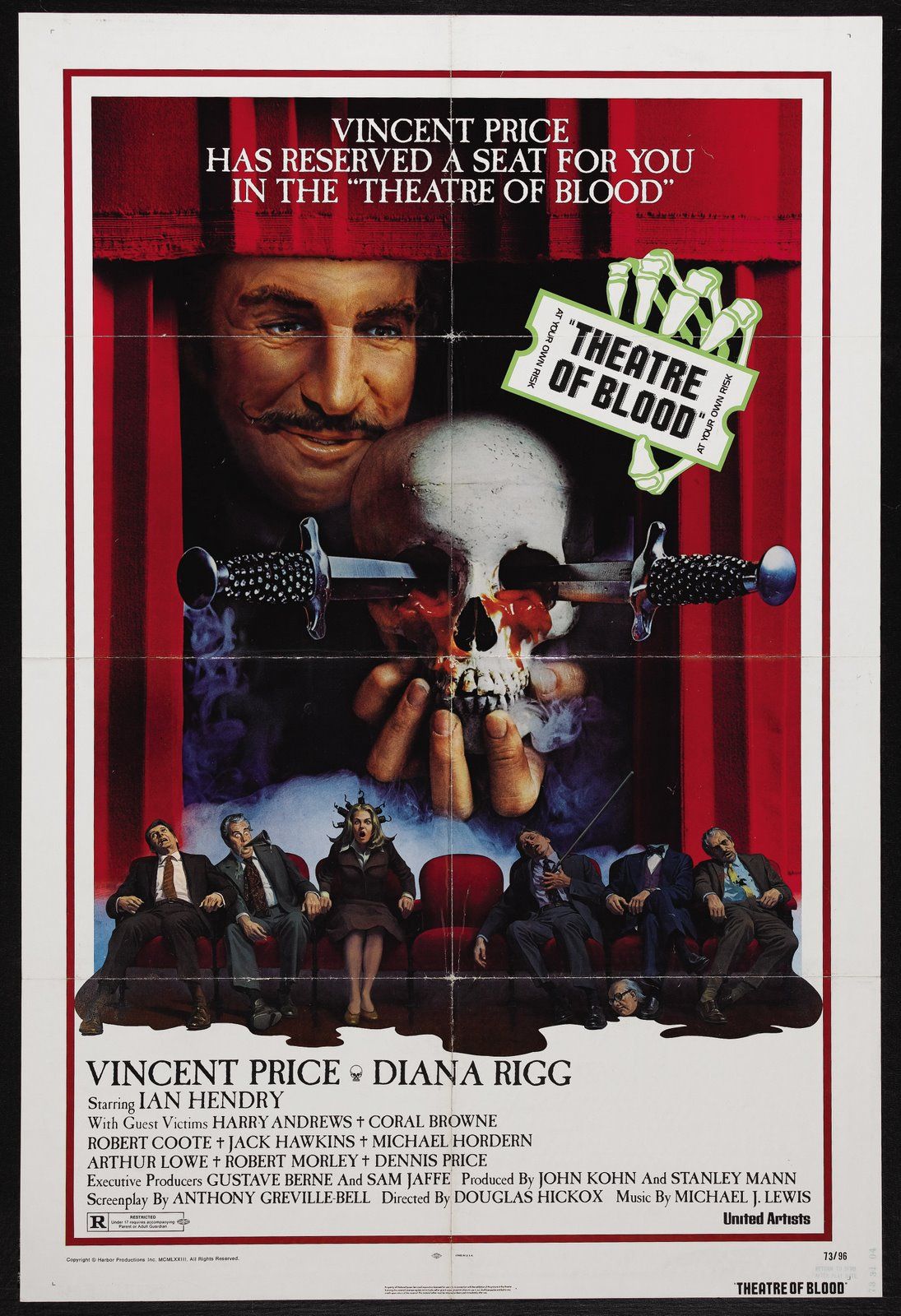 Richard’s Review: Clearly inspired by the series of murders seen in The Abominable Dr. Phibes, Theater of Blood comes across as it’s more mean spirited and bloodier cousin. Price is not quite as comical here but much more maniacal in his quest to rid the world of the critics who shamed him by giving a best actor award to a younger and more inexperienced actor. The murders are more gruesome (I’m thinking of you poodle pie) but just as effective. This was a fun flick but not up to the higher standards that Dr. Phibes established.

Karla’s Thoughts: This one is definitely not my favorite as it was way too graphic for me. And no, I didn’t watch the Merridew murder segment. Price was awesome, as usual, as he clearly reminded me of the superior Dr. Phibes. The film also seemed to be an inspiration for Who’s Killing the Great Chefs of Europe?, especially seeing Robert Morley in both films. The police are a little too stupid here and the critics were too. I didn’t hate this one but I doubt I’d rewatch it. 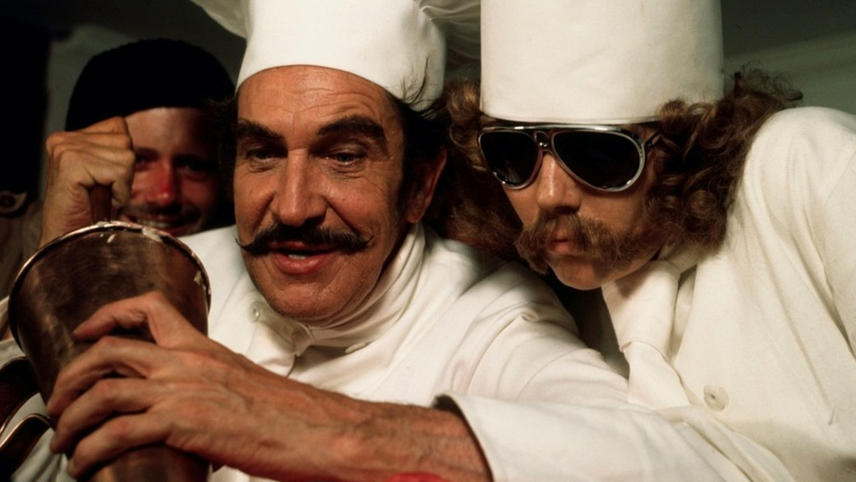 Availability: Theater of Blood was available on a now out-of-print Blu-ray from Twilight Time but you can still find it for about $30.

Plot: Dr. Phibes has awakened and is now in search of ancient scrolls in Egypt. Inspector Trout is still in hot pursuit as Phibes and the resurrected Vulnavia search for the scrolls in a tale of death that crosses the globe. 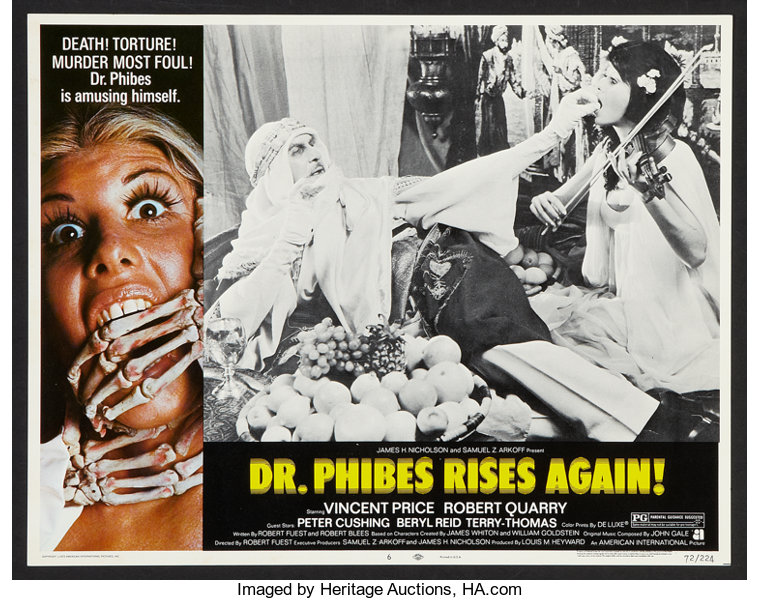 Richard’s Review: Much like the original, multiple viewings have left me loving this one more and more. It doesn’t surpass the original for me but it’s still quite a lot of fun. Oh sure, there are plenty of plot holes and questions as to how Phibes got everything in the desert and in place for all of the deaths. Silly fun indeed and well worth a late night viewing or an afternoon matinee. Price is a joy to watch, even if he seems a little less inspired in this sequel.

Karla’s Thoughts: I really love this one, even more than the original. Price is great once again as Dr. Phibes. The story was interesting and I wanted to see more. I want to know if it actually worked at the end of the film. I assume it did and that they lived happily together but I wanted to see something that at least said that. I don’t understand how Vulnavia is still alive though after her end in the first film. The deaths are imaginative but just how did Phibes get all of that stuff to the desert? How did he power the giant fan? However, these are nitpicks because I’d definitely watch this one again! 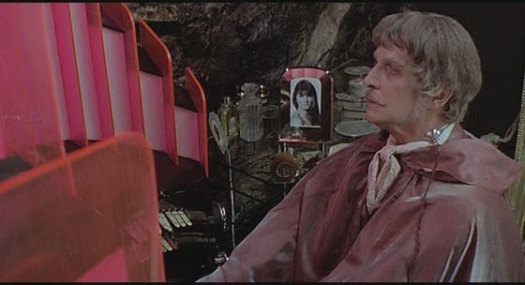 Plot: Dr. Anton Phibes, killed in a car crash upon learning about the death of his wife, returns to seek vengeance upon the doctors who failed to save his wife by using the nine Biblical plagues of Egypt as inspirations for their deaths. 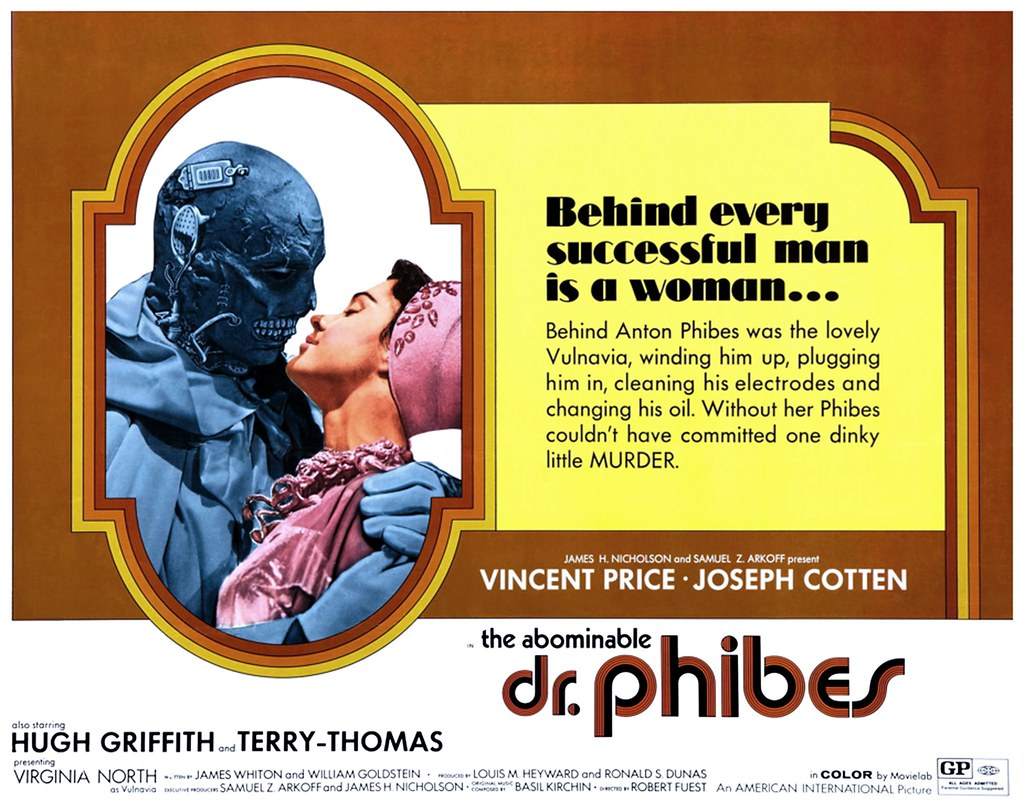 Richard’s Review: For whatever reason, this movie didn’t click with me when I first watched it. In fact, it took several viewings to appreciate the greatness that lurks within its’ celluloid frames. Now, it’s one of my personal favorites from the Vincent Price filmography. I love everything about this classic as Price is chewing up the scenery from start to finish as only he could do.  Highly recommended!

Karla’s Thoughts: I really enjoyed this one. The deaths are imaginative but not quite too gruesome, at least in the way they are presented on screen. Price is so good in his role as Dr. Phibes and is really a highlight of the film. Everything seems to be in a different type of world, not quite the real one as everything is just a little off, such as the bungling policemen and the ever-present Vulnavia. One of my favorites, so I’ll definitely watch this one again and again. 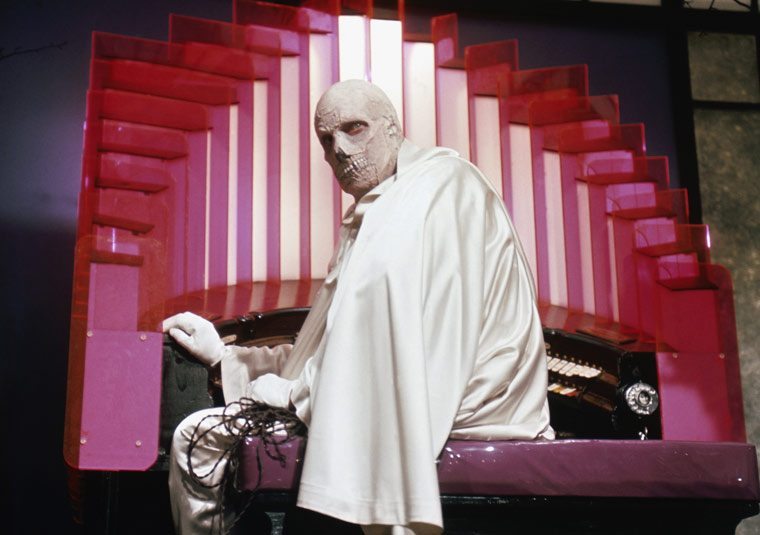 Availability: The Abominable Dr. Phibes is available on DVD as part of the Vincent Price: MGM Scream Legends Collection.