With San Diego Comicon 2019 behind us, all eyes are now eagerly set on the future. Announcements and trailers galore gave us all plenty to look forward to and one of the first television events coming our way is Crisis on Infinite Earths in the Arrowverse! But, are you prepared? Have you read the original source material?

Jeff Owens, my podcasting partner-in-crime, has recently launched a brand new blog dedicated to his love of DC Comics. For his first series of articles on DC Comics Guy, he’s tackling one of the biggest events in comic book history…the Crisis on Infinite Earths. Each week, Jeff is taking us on a journey through every step of the Crisis. From the first few appearances of the Monitor to the death of Supergirl to the very end of the Crisis, you’ll relive all of the adventures and experience details you never even knew about.

Take a look at DC Comics Guy today and prepare yourself for the major television event by experiencing where it all began! And that’s just the beginning because Jeff has other great plans on the horizon, such as Uncle Sam and the Freedom Fighters! Join the adventure now!

This week on episode 621 of the Dread Media Podcast, I finally take a long overdue look at The Limehouse Golem (2016)! Bill Nighy stars as John Kildare, a Scotland Yard inspector searching for a sadistic killer on the streets of 1800s London.

We’ve launched a page on TeePublic and now you can bring the Classic Horrors Club Podcast with you wherever you go! Wear a t-shirt or hoodie to your favorite film screening or a night on the town with friends. How about a cup of coffee or tea with breakfast? Need a perfect gift for the newborn baby in your life? Yes, there are even onesies!

There is a wide variety of sizes and colors to please every monster kid and to soothe the savage beast! Plus, TeePublic runs great sales that’s sure to make even old Frankie smile!

Check out the Classic Horrors Club Podcast store at:

As always, tell ’em Monster Movie Kid sent ya! And thank you for your ongoing support!

It’s likely that most of us have seen some version of the classic short story, The Monkey’s Paw. The tale, written by W.W. Jacobs in 1902, has been heard on numerous radio adaptations, featured in comics and incorporated into a variety of television shows, such as The Simpsons Treehouse of Horror. Of course, the story has even been told in a long list of celluloid adaptations, ranging from short films and anthologies, such as Tales from the Crypt (1972), to several feature length films dating back to 1915 and as recent as 2013. However, adapting a short story into a full length film has some obvious drawbacks. I recently had one of my own wishes granted as I had the opportunity to view the rare 1933 version. 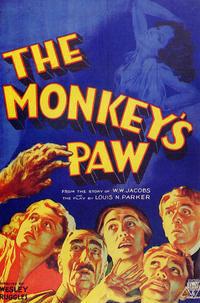 First, some of you may not be familiar with the story itself. It’s a fairly simple supernatural tale involving a mysterious monkey’s paw. Anyone who possesses the paw is granted three wishes. However, the advice to be careful what you wish for has never been more accurate as there is always a price to pay for taking a shortcut to one’s happiness. In the tale, a couple find themselves the new owners of the paw after the previous owner attempts to burn it in a fireplace, realizing the horrors it can bring. The couple, dealing with financial issues and wishing for money, finds that they soon have their wish granted. However, the cost is their son’s life as the payment is a settlement for a work incident. Of course, they then wish for their son to return without thinking of what condition he’ll return in. Mrs. White doesn’t care and is eager to answer the knock on the door, knowing it’s her baby boy returned from the grave. But her husband soon realizes that the thing at the door is no longer their son and uses the third wish to send him back to the grave. This was truly horrifying material for the early 1900s.

The 1933 film was not the first time Jacobs’ story had been brought to the big screen. It was made at least twice during the silent era, first in 1915 and, again, in 1923. Sadly, the 1915 version appears to be lost but the 1923 British version does exist, or at least part of it does. Unfortunately, I’ve been unable to track down a copy to compare it to the next two versions that were made in the decades that followed. Until just a few weeks ago, the 1933 film had also eluded me. That was until it had a special screening at the recent Monster Bash in Mars, Pennsylvania. It was considered lost for years and many websites still list it that way. However, it was first reported in 2014 that a French dubbed copy of the film had resurfaced in a private collection. A few people then began to claim they had seen it through a DVD-R copy. Author and historian Tom Weaver had hoped back in 2014 that the reports were true and that it would be publicly released with English subtitles. Sadly, that has yet to officially happen but Tom did acquire a copy for his own collection and it was screened to an eager audience of horror aficionados. On a Friday night in a darkened hotel ballroom, I sat eagerly anticipating this rare screening, hoping it would live up to my own personal expectations. 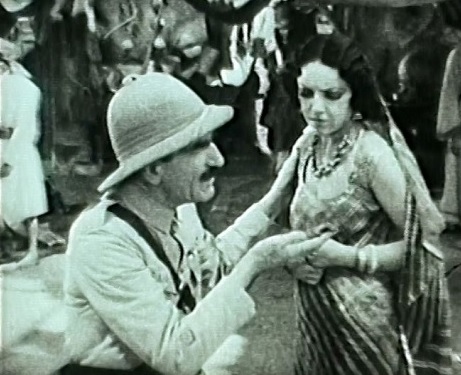 For starters, the current print is in rough shape. It is dark and it’s hard to decipher what is going on in some scenes. The dubbing takes a little away from the true acting of the cast but, thankfully, subtitles have been created that help the story unfold for those of us who don’t speak French. We get only a fraction of Max Steiner’s opening score but what we hear is tantalizing. Our story begins with images of army troops in India and we meet Nura (Nina Quatero), a young woman who used the monkey’s paw to seduce a man into loving her. But, her happiness is short lived as she ends up killing herself. The paw is now in the possession of Sgt. Major Morris (C. Aubrey Smith, Tarzan the Ape Man), an army commander who uses it to defeat the enemy moments before a bomb kills his entire unit and leaves him with only one arm. Years later, he tells the mysterious tale of the paw to Mr. and Mrs. White (Ivan Simpson and Louise Carter). Mr. White immediately wants the paw and eventually steals it from Morris. As he holds it, he swears the paw moves. He eventually wishes for a fortune to help him out of his poor financial situation, which they ultimately receive through a legal settlement after their son is killed at work. Of course, we know where this is headed as Mrs. White eventually forces her husband to wish for their son to return and, moments before a mysterious figure knocking at the door is able to enter the home, Mr. White wisely wishes their son back in the grave.

With an original running time of 58 minutes, the classic tale had to be fleshed out to fit into a feature film. I think directors Wesley Ruggles and Ernest B. Schoedsack (Most Dangerous Game, Son of Kong, Dr. Cyclops and Mighty Joe Young), along with writer Graham John, partially succeed as there is genuine suspense at times. There is a lot of padding, making it a little slow at times, but it’s still entertaining and the climax is both atmospheric and chilling. It’s not necessarily a classic but I think it’s far superior to the 1948 version, which I reviewed back in 2016. That film suffers from a tremendous amount of padding and doesn’t really get going until the last 15 minutes. 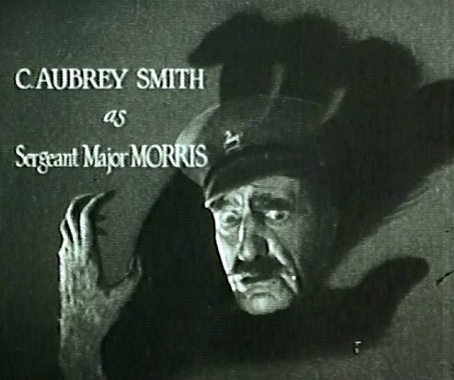 The print shown at the Bash had a running time of around 50 minutes, so apparently some eight minutes of footage is still missing. Supposedly, a happy “it’s only a dream” ending was cut off for the French version. While this leaves the ending of this version rather bleak and sudden, I think it may actually be better as I’ve never been a fan of those types of twist endings, such as we get in Mark of the Vampire (1935). Ultimately, I walked out of the room quite satisfied, knowing that what I had seen was something rare. Frankly, we’re fortunate the print even exists.

Despite the rough and incomplete condition, The Monkey’s Paw (1933)should be available for the public to view. Unfortunately, it still resides in the hands of a private collector and existing copies have been made on the condition it doesn’t get publicly released. I’m thankful Tom Weaver provided a copy to Ron Adams so monster kids finally got a chance to watch this previously lost horror film. Hopefully, we all can add a copy in our own collection someday in the future. For now, the Monkey’s Paw remains barely visible in the dark, silently waiting for its next victim.

This month on the Classic Horrors Club Podcast, episode 33 is for two groups of people: those who went to Mars, PA, last month for Monster Bash... and those who didn’t. Relive the adventure, or live it vicariously as Jeff and I highlight our favorite moments and play some great audio clips of the featured guests.

On the way home, we also listened to two classic British radio programs. First up was The Slide (1966), starring Roger Delgado (The Master on Doctor Who, The Mummy’s Shroud). Then, things really got going with Aliens in the Mind (1977) starring Vincent Price and Peter Cushing in the “movie” we never got to see them make. 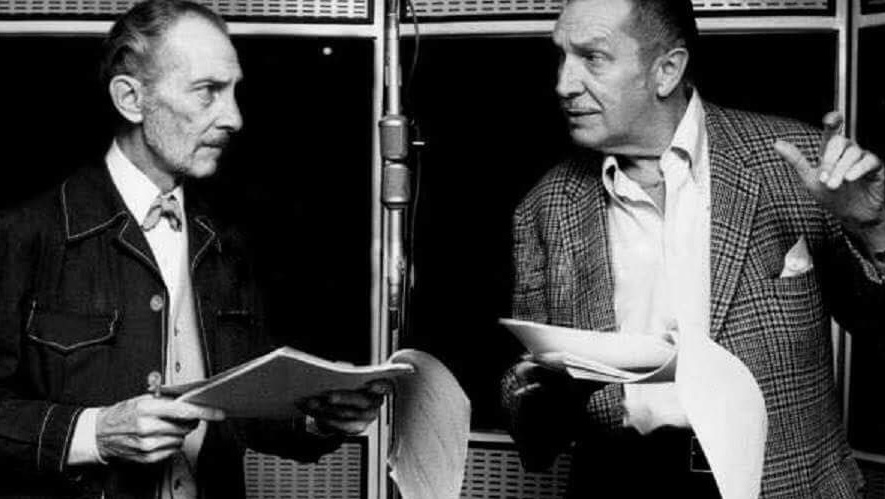 It’s a long one, so let’s take our seats and call this month’s meeting to order…

Join us in our clubhouse at https://www.facebook.com/groups/classichorrors.club/

This month on episode 57 of the Mihmiverse Monthly Audiocast, the Kansas City Crypt opens up for another horror flick from director George Fenady, Terror in the Wax Museum (1973)! With some of the same cast as Arnold, such as Elsa Lanchester, along with Ray Milland and Maurice Evans, this flick takes things a little more seriously. Unfortunately, we still have to suffer through the musical “talents” of Shani Wallis.

Be sure to check out the online home of the films of Christopher R. Mihm for all of the great merchandise and information on how you can help make future films happen! Chris is hard at work on not one but two new chapters in the Mihmiverse story as The Phantom Lake Kids in The Beast Walks Among Us and That Which Lurks in the Dark are on the horizon for 2020. Check out the website to learn how you can contribute today!